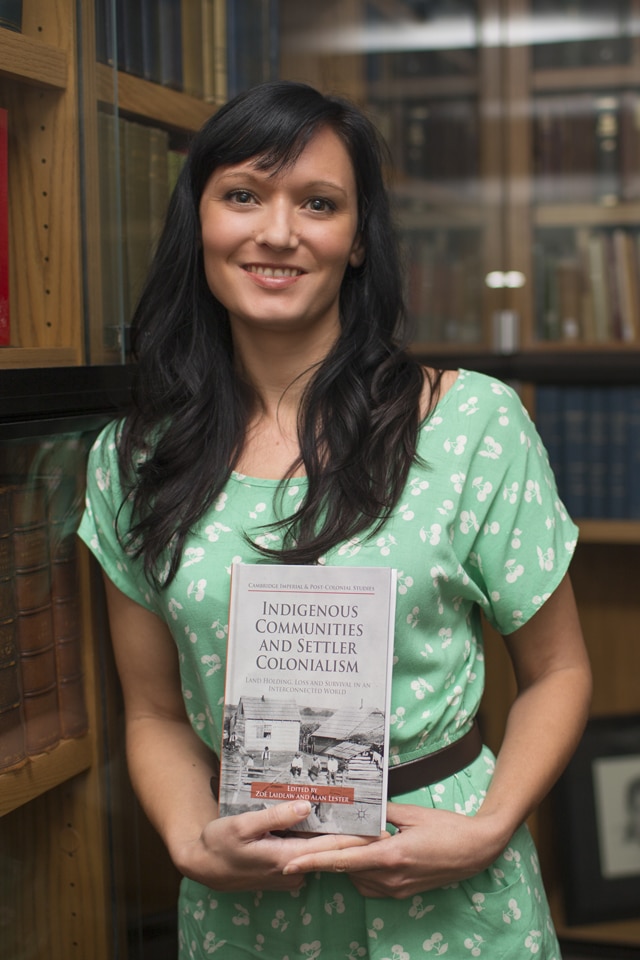 2014 flood, Dr. Kelli Mosteller recently featured as a contributor to a newly published book about the British Empire’s impact on indigenous communities.

The book, “Indigenous Communities and Settler Colonialism: Land Holding, Loss and Survival in an Interconnected World,” is part of the Cambridge Imperial & Post-Colonial Studies series published by Palgrave Macmillan.

Two years ago Dr. Mosteller was approached by Alan Lester, a professor of historic geography at the University of Sussex in the U.K., and one of the book’s editors. He asked if she would be interested in contributing to the book. For Dr. Mosteller, it is important that Native experiences of imperialism, colonialism and dispossession are told from a native perspective.

“Far too often the history of settler colonialism focuses on the settlers and the policies they used to displace indigenous peoples without exploring the responses and lived experiences of those communities,” explained Dr. Mosteller. “I was pleased to see the story of the Potawatomi included in this collection. It allows the reader to see how we fit into a larger picture of indigenous communities contending with settler colonialism.”

Dr. Mosteller’s contribution is one of two chapters that address settler colonialism in the United States. In it, she explains how the Potawatomi in Kansas responded to the federal government’s policies of allotment and assimilation.

“I begin with the Potawatomi’s removal from the Great Lakes to our reservation in Kansas,” she said. “I then look at the allotment of that reservation, examining both the government’s motives and the resulting consequences of the policy, both intentional and unintentional, for the Tribal members who were subject to it. I wanted the reader to have a better understanding of the Potawatomi responses to the federal land and removal policies that constantly impacted their lives.”

Lastly, Dr. Mosteller provided the editors a photo that was taken on the Potawatomi Reservation in Kansas, which they ended up using for the front cover of the book.

“I am honored to have a chapter included in this book and to represent the Citizen Potawatomi Nation,” said Dr. Mosteller. To learn more about the book, visit tinyurl.com/CPNSettlerColonialism.