Preserving the Potawatomi language is essential in the Tribe’s effort to maintain its identity as a distinct and sovereign people. On the front lines of the battle to maintain that distinct Potawatomi identity is the staff of the CPN Language Department, who in their everyday work keeps the Tribe’s native language alive. 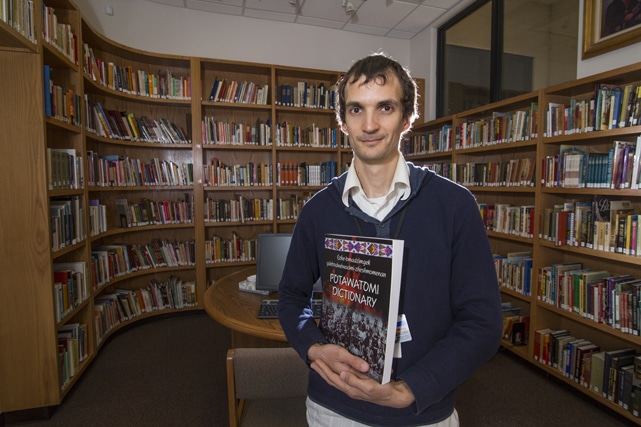 “One of the things I found interesting and have learned more about Native Americans is their resilience in preserving their history,” said Ozbolt.

In 2006, he graduated with his Master’s in Native American Studies from OU before finishing a Ph.D. in Anthropology with an emphasis in linguistics in December 2014. His studies examine languages by looking at its cultural and social context. Upon completion of his doctorate, Ozbolt was interested in putting his years of study to practical use. When he saw the job opening offering him a chance to teach Potawatomi, an extensive but little spoken Native American language, he jumped at the chance.

“I’ve been in school my whole life so it feels great to actually be applying what I’ve learned all these years as a teacher,” said Ozbolt.

As a language aid for CPN, Ozbolt is deeply involved in developing the department’s self-paced, online courses, which are due to go live in the fall of 2015.

“We are a team of five people working on the program, but there is a lot to do because every lesson contains quizzes, exams, evaluations and lectures,” said Ozbolt.

CPN Language Director Justin Neely and Ozbolt have also been seeking out new documents from archives around the country in the Potawatomi language that can be incorporated into their lessons. Recently, they found a Potawatomi version of the “Gospel of Mathew” at the Kansas Historical Society and are working on translating it to English.

“I am also transcribing a catechism that was written by Hoekan, a Jesuit priest who lived with the Potawatomi in the 1840s,” said Ozbolt. “The catechism is written in French and Potawatomi.”

Ozbolt is tasked with writing down the section in French, which he admits is quite challenging given Fr. Hoekan’s handwriting, before translating it into English to be used in the language department’s instructions. Translations and linguistics aside, Ozbolt continues to find new facets of Native American and Potawatomi culture the deeper he explores.

“One of things I find interesting about CPN is its place among the different bands of Potawatomi,” said Ozbolt. “The Potawatomi language, as far as
I have learned so far, is not heavily influenced by the French language as I had previously thought they might be, given their history.”

On his own language capabilities, Ozbolt, admits that learning the Tribal language is a challenge all its own.

“My Potawatomi is growing slowly, but day by day I am learning not only about the language but the Tribe as a whole.”

If you’re interested in learning more about the Potawatomi language please visit the CPN Language Department website at www.potawatomi.org/lang.