Lehman shows the way into the dance arena 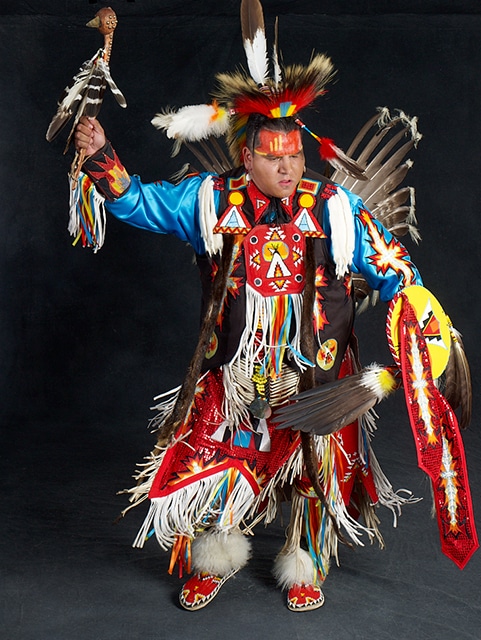 The man waving the white towel is how many Festival-goers know Arena Director Coby Lehman. Positioned ahead of the CPN Veterans Color Guard, Lehman’s signal is what begins Grand Entry at the annual CPN Family Festival Powwow.

Lehman has served as the arena director following several years of winning the men’s dance contest. His experience on the powwow circuit led Vice-Chairman Linda Capps to request he sacrifice competing to teach Potawatomi on the proper etiquette in the dance arena.

“My uncles Roman and Richmond Harjo were champion straight dancers and gourd dancers in the 1970s and early 1980s. I always admired them for that, and they took me under their wing, so I learned from two of the best,” said Lehman.

He is old and wise enough to recall the times when, as he puts it, “The Potawatomi Inter-tribal Powwow was the biggest in the U.S. You had the best dancers from all over the U.S. and Canada coming down here to compete and win prize money. It was a sight to see and learn in.”

As he got older, the prodigious athlete’s interest in dancing faded as he spent his summers on the ball fields representing the powerhouse Asher High School Baseball Program. Upon returning to Ada, Okla. after college, Lehman met brothers Brad and Rick Greenwood, who knew of his time in the powwow arena. After some prodding, the Greenwoods convinced him to join their drum group, Eagle Cry, which sang northern style. At a performance with the group in the town of Seminole, Okla., Lehman was introduced to Bear Roberts, a champion traditional dancer, who recruited the Curly-family descendant to his own family’s drum Little Eagle Drum Group. Joining the Roberts’ drum group was a seminal moment for Lehman.

“Bear’s brother, Michael Roberts, who became my best friend, explained that they traveled all over the country to powwows, where they were singing and dancing, and asked if I was interested in that,” recalled Lehman with a chuckle. “All I had was a truck payment, so from there it just went for a good ten years where we were all over the U.S. and Canada with the Little Eagle Singers.”

At that point, Lehman was strictly a singer with the Little Eagle group. In a powwow in Harbor Springs, Mich., though, an opportunity presented itself. In the traditional dance competition, the four top dancers received cash prizes. However, only two entrants were in the competition. Michael Roberts, a world champion fancy dancer in his own right, had an extra traditional dance outfit and encouraged Lehman to enter.

“He made the very good point that I’d win money just for competing,” said Lehman. “So, I used his outfit and got second place. That spawned my getting back into dancing.”

Though he admits he had a hard time placing that first summer, Lehman immersed himself into the extensive training regimen necessary to compete with the best dancers in North America. He became a regular top finisher in powwows around the continent. Of the many honors he received, Lehman takes special pride in his first place finish in northern traditional at the United Tribes Powwow in Bismarck, N.D.

“You have to look at it as a sport nowadays. People train year round to be champion dancers. They have to. You may be dancing for two or three minutes a song, but powwows can go all night. I regularly had to wait until the early morning hours before my dance took place,” Lehman said.

It is that understanding and seriousness that makes Lehman an ideal arena director for the Citizen Potawatomi Nation. Dancing, singing and proper arena etiquette remain unfamiliar to many Potawatomi who take part in the annual Family Reunion Festival Powwow.

“A lot of our old ways have been lost here, so I always encourage people who want to join the powwow and dance to make sure they’re one with the Creator. Pray on it, because they say it comes to you and you’ll know.

“Make sure your mind is right, your body is clean from drugs or alcohol, and that this is something you want to pursue seriously. This isn’t just a weekend deal that you just forget about the rest of the year until Festival rolls around again. When you’re doing this, it is something our ancestors did, and you want to make them proud.”