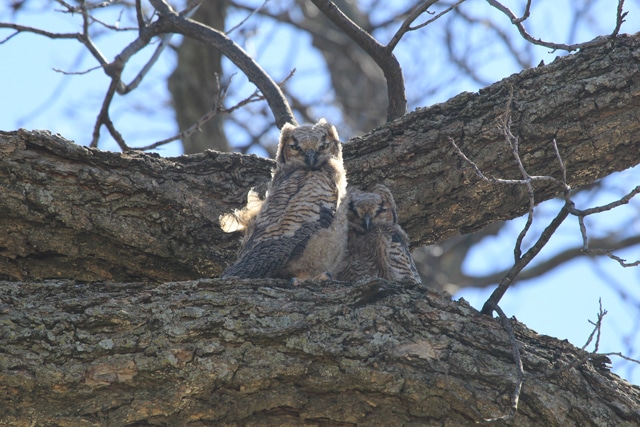 The landscscape around us has swiftly changed with spring’s arrival. Winters colors have gone and the trees leafed out almost overnight it seems. The Great Horned owls who nest in the big pecan out back have already seen their owlets hatch and leave the nest. In the evening you can hear them calling with a series of screeches to their parents in the western tree line. The fledglings will remain dependent on their parents for food until fall and their harsh begging calls will most likely be heard throughout the summer.

Just as the owlets left the nest, last year’s pair of Canadian Geese arrived. They spend the better part of the day in the tall patch of grass we have left for them under the big pecan although the smaller female continues to come and go from another pecan tree out front where we suspect she is laying eggs just as she did last year in that same tree.

The male is very protective and will challenge anyone or anything that enters his newly found territory, which seems to be anything on the south side of the aviary. Even the resident turkey toms are challenged when they wander into his newly claimed territory despite the toms being much bigger. He will watch over his mate for the next month as she incubates up to eight eggs.

Wadasé Zhabwé continues to explore new territory to the south west of the aviary. She recently ventured as far south from the Washita River as Comanche, Okla. She made a trip north to Ponca City the beginning of April but stayed just two days before stopping overnight on the North Canadian River in the Dale bottom near the Grand Casino Hotel and Resort before returning to the Washita River near Chickasha.

We were excited to see her return to the Ponca City area along the Salt Fork of the Arkansas River  though. She may have ventured north with migrating birds as they return from wintering areas in the south. We have seen large kettles of turkey vultures and spotted several bald eagles using the same thermals as they pass high above us. She may have been checking on the hunting grounds there and found that the bass weren’t running just yet. Last year she went to Keystone Lake and the area around Ponca City the first week of May. Even though she continues exploring new territory she is adhering to many of the same patterns as the previous year. We will continue to document these trends as we prepare for the time when don’t have her GPS backpack to rely on. We have made several unsuccessful trips to the areas along the Washita River in and around the Chickasha area that she has frequented but we have been unable to spot her with any certainty. We have seen many bald eagles in the area though.

We have talked with several landowners, farmers and ranchers and even a few golfers in the area and suspect that a few of them have seen her fishing in the river and nearby ponds. That was no typo when you read golfers either, because she has even spent some time on the backside of the River Bend Golf Course in Chickasha near the Wichita River. Hopefully, with the knowledge of her wearing telemetry and being banded, the next time those individuals spot an eagle, they will be able to look for those items and positively identify Wadasé.

The White Bass will begin spawning soon and we expect her to return to Keystone Lake this month for an extended stay. As always we encourage you to keep your eyes out for Wadasé or other eagles and we welcome any reports or encounters you might have. To follow her movements with us you can visit
www.arcgis.com/home and search for “Potawatomi eagle.”

Send your encounters with Wadase or any other eagles in the state or wherever you may be to Jennifer.randell@potawatomi.org. For more information or to read previous updates please visit www.potawatomi.org and search the site for Wadase or visit https://www.potawatomi.org/aboutwadase