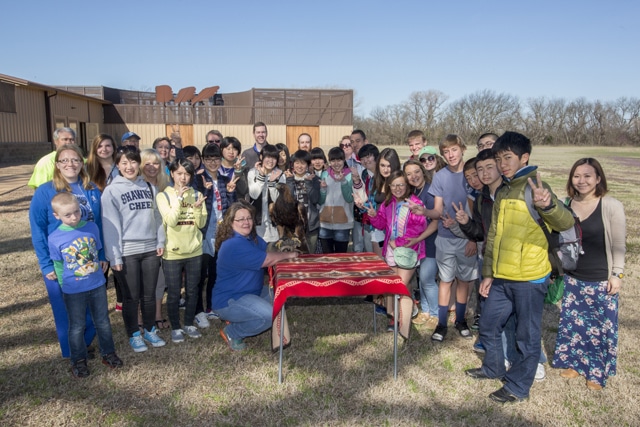 In 1987 the Tokyo Denki Kagaku Kogyo company opened for business in Shawnee, Okla., an event that tied the Oklahoma town with a fellow municipality in Japan. The sister city relationship with Nikaho was formalized by then-Shawnee Mayor Pierre F. Taron Jr. due to the Japanese city’s own ties with TDK and its home as the company’s first president and factory.

In 1990, the first sister city delegation from Nikaho arrived in Shawnee followed by a reciprocal visit a few months later by the American delegation to Japan. Twenty five years later, dozens of citizens from each city have crossed the Pacific Ocean on trips designed to foster ties and cultural understanding.

In July 2014, Tribal-member Kate Barrett, whose Potawatomi name is Memekwe, took part in one of these visits to Japan. Barrett’s family recently returned the hospitality shown to their daughter on her trip by hosting two Japanese travelers in their visit to Shawnee in April. Her mother, Tiffany Barrett, who is also a coordinator for the CPN House of Hope, and husband and Tribal member Jack Barrett of BDC Gun Room, accompanied the delegation of 30 Japanese citizens around Shawnee.

“On the last day we had an opening, so I suggested that we take the group out to the CPN Eagle Aviary,” explained Tiffany Barrett. “The visit to see the eagles, which play such an important role in Potawatomi culture, was such a success that the sister cities program has asked it to become a regular feature of the Oklahoma side of the tour.”

During the aviary tour, in which the groups got a firsthand look at the eagles in the enclosures as well as Myanabe, a golden eagle, another visitor joined the procession.

“As we were there, aviary director Jennifer Randell pointed out a wild bald eagle that was circling overhead,” said Barrett. “It was such a significant sight to have this wild eagle interacting and squawking with the eagles in the enclosure. The experience of it all really impressed our visitors.”

Tribal-member and Shawnee City Commissioner Michael Dykstra, who speaks Japanese and whose wife Kumiko is from Japan, also accompanied the group as they visited Shawnee.

“This program is just a great way to foster ties between two peoples who are connected through TDK, a company that means so much to both communities,” said Dykstra. “As a proud Potawatomi and member of the city government, I’m just happy to have shown our visitors the important cultural and economic impact tribal-owned entities have on our city.”

If you would like to learn more about the sister cities program between Shawnee and Nikaho, visit the group’s Facebook page at http://tinyurl.com/ShawneSisterCity.