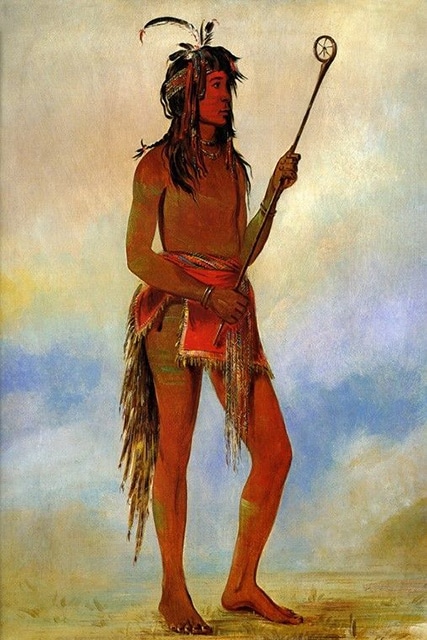 The first known six-sided dice dates from 3,000 BC Mesopotamia in what is now northern Iraq. The first horse race in America took place in the year 1668. Gambling and sport have been a part of the human identity for as long as humans have existed, a practice that continues today online, in casinos and in the lottery ticket.

For the Potawatomi, games of chance and competition are part of the Tribe’s long history. To educate people on this history, CPN Cultural Heritage Center Director Dr. Kelli Mosteller is curating a semi-permanent exhibit at the Grand Casino to showcase this facet of the Tribe’s past and present.

“Gambling in Potawatomi culture has been going a lot longer than most would think,” said Dr. Mosteller. “This is a teachable moment. If someone is staying in the hotel they might wander into the casino and learn something new by having this here.”

Games of skill, such as stickball, shinny and snow snake are all part of the exhibit.

Stickball has been around since before the 1600s. The game is quite similar to modern day lacrosse and is a regular activity of participants in the Potawatomi Leadership Program and FireLodge Tribal Youth. The game is played on a 100 yard field. At each end there are tall cylindrical poles used for goals. To score, a player must hit the pole with the ball.

Shinny is similar to field hockey and is usually played by women, while snow snake is skilled game that is played when it’s snowy and icy, which was very common when the Tribe lived in its original homelands near the Great Lakes.

“In shinny, you make a long chute with the ice and then throw a long, carved stick down it in order to see who can get their stick to travel the furthest,” explained Dr. Mosteller.

Between each display, videos describe each game and play examples on screen to give visitors a visual of what each looks like.

CHC curator and archivist Blake Norton developed the replica pieces used in the display as well as the graphics for the videos. Each replica and example requires Norton and his staff to hand make the pieces in the showcase.

The exhibit will be used as an educational piece which shows the Potawatomi’s ties to gambling began long before the first shovel ever broke ground on an Oklahoma casino.

“This will help showcase that these Native American casinos are run by a Tribe that has a distinct culture,” added Dr. Mosteller.

The exhibit will be semi-permanent, with only minor changes made over the course of its time on display and should be completed by April.

“The exhibit is to remind people that the Grand is a Native American casino owned by Native Americans,” said Dr. Mosteller. “We want to incorporate the Potawatomi culture any way we can.”

For more information about the display or to learn more about the Tribe’s history and cultural practices, please contact the Cultural Heritage Center at 405-878-5830 or visit their website at www.potawatomiheritage.org.