CPN Director of Public Works Richard Kunze was recently named the Greater Shawnee Chamber of Commerce’s Agribusiness Person of the Year. It was recognition a long time in coming, especially considering a portion of his nomination stemmed from a somewhat contentious vote on a county sales tax in the 1990s.

Kunze is a familiar face throughout Pottawatomie County, Okla. He was born and still lives on the family ranch in the northwestern portions of the county, so he was familiar with the issues facing residents and businesses alike in rural areas outside of major towns like Shawnee and Tecumseh.

In 1995, Kunze travelled throughout the county to speak in favor of a one cent county sales tax, which eventually became permanent, and has kept the county’s finances above water for nearly two decades.

It wasn’t an easy assignment, especially considering two prior attempts at raising the tax failed. Kunze, who was not affiliated with the county government, volunteered to speak on behalf of the increase to skeptical residents. 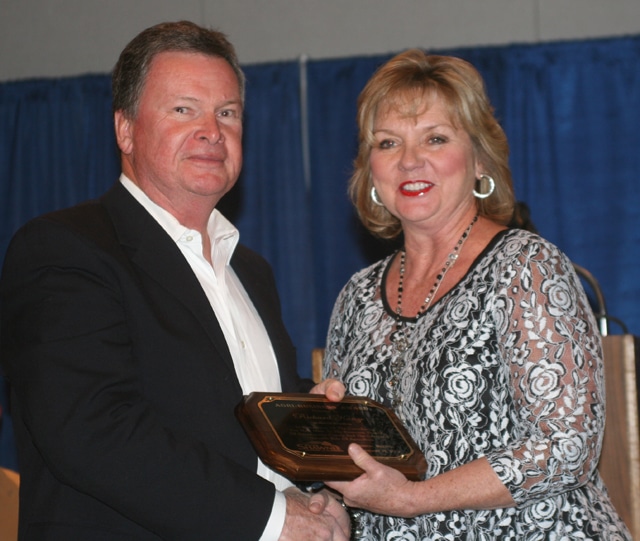 “I wasn’t elected and I wasn’t a lawyer,” said Kunze. “And I could verbalize the issues in a way to people like me, business owners and county residents, could understand. “

Compared to their ability to collect revenue, which largely rely on ad valorem, or property taxes, Oklahoma county governments face a daunting task in providing the full services they are charged with. Kunze, like many county residents, saw the need for the increase and spoke at every town hall and civic group that would have him.

“It was the right thing to do,” explained Kunze. “The county governments are grossly underfunded. Everybody thinks all county commissioners are responsible for is roads and bridges, but the truth is they provide all sorts of services.”

His efforts paid off, as county sales tax revenues today are divided up between county 911 services, fire departments, the exposition center and county jail. A significant portion of the tax revenue goes towards road and bridge repair funds, which was not always the case prior the tax’s approval by Pottawatomie County voters.

His nomination by the chamber of commerce also centered on his recent work for CPN.

His successful sales tax campaign brought him to the attention of Tribal Chairman John Barrett, who was exploring a CPN-bid to help rescue the money losing Pottawatomie County Rural Water District 3. Kunze’s grasp of the issues facing county residents with subpar or non-existent water services resulted in him being named CPN Director of Public Works,which oversees the rural water district.

“I’m proud of the nomination for the county sales tax and my work for overseeing Rural Water District 3,” said Kunze. “The approximately four to five million in infrastructure improvements that the Tribe has already spent to expand the water district’s distribution system takes water to a people who either didn’t have enough or didn’t have any good water to drink. Communities and schools in Wanette, Asher and Dale have benefitted from the Tribe’s funding of RWD3 and it shows with the growth of paying customers from 550 to almost 1,000 today.”

Kunze’s activism for improving services to rural Pottawatomie County residents was instilled at young age. He credits his father, a rancher and dairy farmer, with cultivating an interest in the wider community, while his mother, a school teacher, trained him to be well spoken. The fact that both lessons stuck with Kunze have undoubtedly been to the benefit of the county’s residents. He is equally effusive of his two sons, whose participation in the Future Farmers of America program, including their American Degrees in FFA, resulted in his own return to tending a small cowherd as his father had.

“It’s important that I work as hard as I can because I’m inspired on a daily basis by my wife of almost 40 years as she battles cancer, a struggle that has continued for more than 21 years.”

The longtime rancher and former food distribution business owner was grateful for the nomination, and explained the significance of receiving it.

“The basis of this county is agriculture,” he concluded.” The people here benefit from the fact that so much of the area is agriculture based, and sometimes they may need to be reminded of how important it truly is. I’m a big fan of that bumper sticker that says ‘If you eat, you’re involved in agriculture.’ We’re all tied into it, and it’s just great to be recognized.”