On April 13, 2015, Tribal member and Assistant Director of CPN’s Employment and Training Program Margaret Zientek testified before the U.S. House of Representatives Subcommittee on Indian, Insular and Alaska Native Affairs concerning House Resolution 329. Below is an abridged version of her remarks. To view the full video of her testimony, click here. 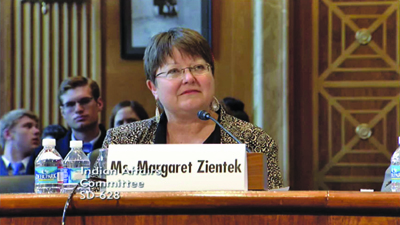 As co-chair for the P.L. 102-477 Tribal Work Group for 15 years, I speak to give voice for the 65 employment and training programs serving more than 250 tribes across the U.S.

I cannot state strongly enough tribal appreciation for the committee’s attention to this important and long overdue bill, H.R. 329. The positive impact in terms of tribal services, increased efficiency and the promotion of job creation in Indian Country is greatly needed.

The 477 Initiative has been essential for the development of effective and efficient tribal services to increase employment, training and related social services in Indian Country and to date has received the highest OMB PART rating of any program in Indian Country. With the consolidation of funding streams, tribes use this initiative to reduce administrative burdens and increase services to the most needy. It has provided flexibility for tribes to tailor activities into a single program to meet the unique needs of their respective communities while still strictly adhering to the Government Performance Results Acts accountability standards.

In the fiscal year 2013, 43,702 people were served through the 477 Initiative. For adults for whom employment was an objective, 43 percent entered unsubsidized employment. For the adults and youth who attempted to earn a degree or certificate, 58 percent reached their goal. The increase adult earnings was $7.84 an hour, while the increase in cash assistance recipient earnings was $11.08. With unemployment rates ranging from 20-80 percent across our tribal programs, these numbers demonstrate a phenomenal success!

The Citizen Potawatomi Nation’s 477 Program has been in place since 1996. Over the past four years, 6,000 participants were served through the 477 program. Of those who had employment as their goal, 47 percent achieved unsubsidized employment. Average gain per hour was in excess of $4.29.

The Citizen Potawatomi Nation is just one example where tribes utilize the 477 Initiative to serve the hard-to-serve population in high unemployment areas with great success. The 477 Tribes are able to move tribal members from cash assistance programs to unsubsidized employment and self-sufficiency.

In 2012, at the instruction of House and Senate appropriations language and in combination with the president’s Administrative Efficiency Executive Order, federal agencies and 477 Tribal Work Group members formed the P.L. 102-47 Administrative Flexibility Work Group. After two years of meetings, a consensus was reached on a number of issues, however, disagreements over fund transfers and reporting remain. In May 2014, meetings were temporarily suspended. No additional meeting of the administrative flexibility work group has been held since. This bill, H.R. 329, addresses and provides resolution to the majority of the remaining issues.

The Employment, Training, and Related Services Consolidation Act of 2015 builds on past successes and lays a framework for expansion. The proposed law makes it clear the intent of Congress is to allow tribes true consolidation of programs from three very different federal agencies in the Bureau of Indian Affairs, Health & Human Services and Department of Labor with no separate program reporting to each agency, and reaffirms these funds can directly support economic development and job creation.

In sections 9 and 14, H.R. 329 also provides dispute resolution not previously present in the Act.
These provisions make it clear the intent of Congress is for tribes to be able to maximize their ability to leverage funds and to provide the most efficient services to those in need.

On behalf of P.L. 102-477 tribes, I thank you for hearing and responding to our needs with this proposed law. We urge the expeditious review and mark-up of H.R. 329, which resolves these issues and permits long term workforce development goals for which the Tribes and tribal organizations have been working.