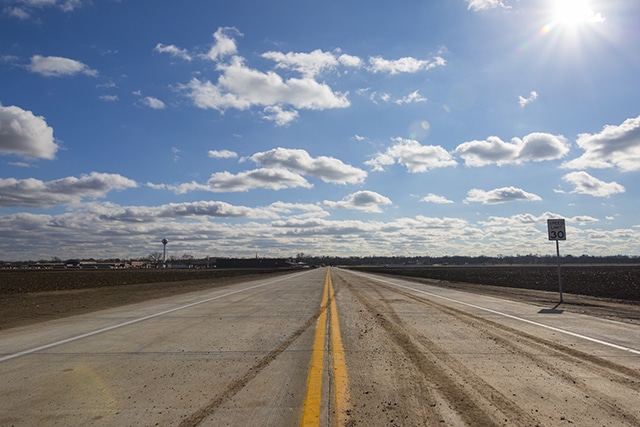 Gordon Cooper Drive, named after Shawnee’s most notable export besides Brad Pitt, runs south from the edge of town at the North Canadian River and into the jurisdiction of the Citizen Potawatomi Nation. Contrary to some municipally-owned roads in the town’s southern periphery which show signs of disrepair, stretches of Gordon Cooper Drive down to Benson Park Road tend to be well maintained.

“It’s technically a City of Shawnee road,” explained Art Muller, director in charge of the Tribal roads department. “But we contract most of the work that is done, and pay for, what is essentially a city street that runs through the Tribe’s trust land.”

Many main roadways south of the river in northern Pottawatomie County in the Tribal jurisdiction fall under the supervision of Muller and his four person department. Though they may be small in numbers, Muller’s staff has overseen more than $9.6 million in construction and repairs of roads, parking lots and other motor vehicle infrastructure since 2010.

The funds used by the roads department emanate from the Department of Transportation’s Federal Highway Administration’s Tribal Transportation Program, a unique source of revenue that like many CPN programs, are only available to tribal entities.

“When we can assist the county and city where their roads run on Tribal trust land, we do so,” said Muller.
The maintenance of this infrastructure is especially important in a country so reliant on the automobile. An increasingly outdated federal gas tax and more fuel efficient vehicles have cut into the monies used to improve America’s aging road infrastructure.

Fixed at 18 cents per gallon since 1993 and not tied to inflation, the gas tax faces steadily decreasing revenues despite Americans’ reliance on the automobile. These shortfalls have directly impacted the federal Highway Trust Fund. For the last 13 years, the fund’s expenditures have exceeded its revenue, resulting in budgetary shortfalls across the U.S. as roads, bridges and other automobile-related infrastructure deteriorates.

The lack of revenue at the top has impacted construction and repairs at the state, county and local levels, leaving many American roads in constant states of triage.

Into these budgetary shortfalls step tribal entities like the CPN Roads Department, which has access to federal money intended to improve infrastructure on tribal lands. In many areas in Pottawatomie County, tribal-local partnerships at the city and county levels have proved fruitful.

In 2012, following an agreement with the Shawnee City Commission, CPN provided $625,000 for the resurfacing of the southbound lanes of the James W. Allen bridge. Spanning the North Canadian River on Shawnee’s southern city limits, the bridge is essentially the starting point for Gordon Cooper Drive. The Tribe had access to the funds through the federal government’s American Recovery and Reinvestment Act of 2009, which was passed in the aftermath of the 2008 financial crisis.

In January 2015, CPN’s $500,000 contribution to the southern portions of Gordon Cooper Drive allowed a long-planned street widening project to move forward. With funds from CPN, the City of Tecumseh, Pottawatomie County and the Oklahoma Department of Transportation, construction will begin to widen the road to four lanes between Bob Crouch Drive and Benson Park Road.

The roads overseen by the Pottawatomie County Commission are also beneficiaries of Tribal funds. The CPN Roads Department contributed funds for the rock coverage of Westech Road in northwestern Pottawatomie County as well as road repairs on Hardesty Road just east of Gordon Cooper Drive.

The Tribal roads department also oversees the construction of parking lots, maintenance of transit vehicles and street lights in its jurisdiction. Those taking a nighttime drive along a well-lit Gordon Cooper Drive towards Hardesty Road ride atop the department’s work.

Like all governmental entities, the department accepts bids from vendors for each individual project.

“Once the project enters the construction phase, it isn’t cost effective for  the Tribe to do the work ourselves,” said Muller. “If it’s a rainy day, and we’d still have to pay our Tribal employees even though there was no work being done. By doing it this way, the contractor takes on these costs as part of the fixed contract agreement and the Tribe is able to oversee the project while saving money.”

Like many of Oklahoma’s larger tribes, the presence of an organized and efficient Tribal roads program benefits all residents and businesses, both Native and non-Native within the tribe’s jurisdiction and the surrounding communities. Roads like Gordon Cooper Drive and Hardesty Road are vital routes for the communities in and around Shawnee and Tecumseh. Their upkeep is an all-around positive for all citizens, local emergency services and private businesses.

“We do pretty well considering we oversee roads of some kind from McCloud to Sacred Heart,” said Muller. “Currently, CPN has more than 1,100 miles of paved roads and 453 miles of unpaved roads that qualify for funding and repair.”

The department’s work is emblematic of CPN and other neighboring tribes’ roles in the Shawnee-Tecumseh area, filling in where cities or state services have receded. An often thankless job that is only noticed once someone hits a pothole, Tribal programs and departments like Muller’s remain vital institutions in the maintenance of rural infrastructure needs.