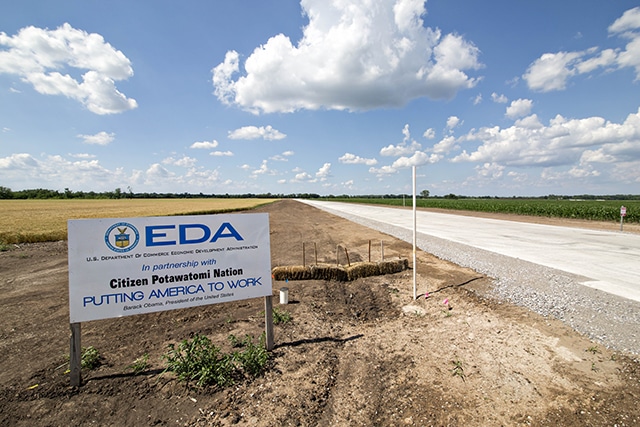 Progress on the long-planned Iron Horse Industrial Park continues, as the second phase of the project moves forward thanks in part to federal grant funds.

The 2015 Department of Commerce, Economic Development Administration grant will provide more than $1.2 million in additional funding. Citizen Potawatomi Nation will pay for initial costs associated with phase two of the Iron Horse project and be reimbursed using the grant funds.

“Phase two consists of rail construction inside the park itself,” explained CPN Economic Development Director Dr. Jim Collard. “Right now we plan on purchasing roughly seven thousand linear feet of rail to run inside the park for its tenants’ use. Without the grant support from the U.S. Department of Commerce, this would not have happened.”

The grant project, which runs from October 2014 to October 2019, is another example of federal and tribal cooperation in the realm of economic development. The industrial park is located on the national rail line network on 400 acres of Citizen Potawatomi Nation land held in trust by the Bureau of Indian Affairs.  It’s location in the center of the United States allows access to the interstate highway system and is less than one hour’s drive from Will Rogers World Airport in Oklahoma City, Okla.