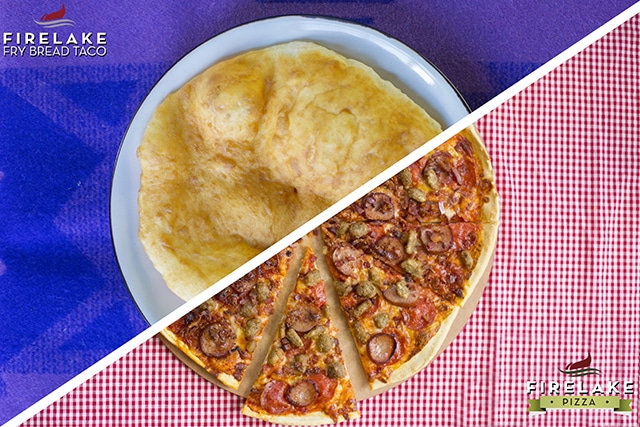 There will be some new aromas in the air at the corner of Hardesty Road and S. Gordon Cooper Drive in the coming weeks as FireLake Fry Bread Taco and FireLake Pizza restaurants are now open. Both restaurants offer a create-your-own menu along with traditional specialty items.

“I encourage all to try our new restaurants,” said CPN FireLake Pizza and Fry Bread Taco Manager, Tammy Tate. “I really think people will want to come try the Fry Bread Taco because it’s unique and the only one in Oklahoma.”

The Fry Bread Taco begins with a slice of fry bread, which is made using a combination of a few CPN Tribal members’ authentic recipes. Patrons then choose a type of meat, bean, toppings and sauce to complete their dish. Other items on the menu include corn soup, bowls of beans, meat pies and even fry bread with fresh fruit to satisfy those with a sweet tooth.

“We serve traditional food that belongs to Native American culture. It’s being unique and being proud of who we are as a people,” said CPN FireLake Pizza and Fry Bread Taco Assistant Manager and Head Cook, Preston Goombi.

The new pizza restaurant has its own unique offerings.

“This isn’t San Remo’s 3.0,” said Tracy Peltier, General Manager of FireLake Resort, which oversees both new eateries. “We’ve got a totally revamped menu with entirely new recipes and ingredients. The Potawatomi do a lot of good things in the surrounding areas, and we’re confident that making pizza is going to be on that list too.”

Takeout and call in orders are also available.