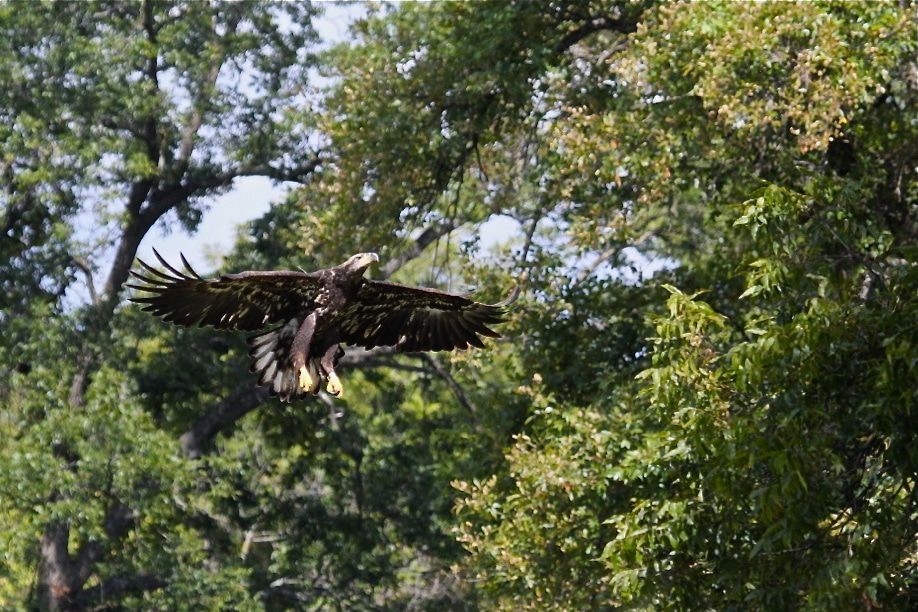 At the time of the last Wadase Zhabwe update, Wadase was heading further north from the area she had been consistently staying near Ponca City, Okla. on the Salt Fork River and further from home on September 14. We had to wait three very long days to check telemetry to find out where she might be headed. We now know she stopped just a little over four miles from the town of Blackwell and spent a few days there on the Chikaskia River. After that she began working her way back south.

She spent the next few days stopping off along rivers she passed along the way until the evening of September 19 she stopped near Harrah on the North Canadian River,  about 20 miles northwest of the CPN Eagle Aviary. That was the closest she had been since June 23.

To say that we were excited would be a great understatement. We scanned the skies each day looking for her and every large bird in the sky got our full attention. After a few days we decided we couldn’t wait any longer and it was time to go look for her but before we could load all the camera gear up and go a small kettle of birds caught our eye. At first inspection it was just turkey vultures.

We did notice though, that one larger bird was flying higher than the rest. As they approached, it changed direction and dropped lower until it was clear that it was no vulture. Wadase was home!

She circled the aviary pasture dropping lower with each wide turn and easily glided down to the pecan tree out front and landed on her old favorite perch. She surely must think that the two people she so often sees here at the aviary are crazy since we were running around like mad, scrambling for the camera and binoculars. She looked incredible. She has now completed her molt this year and for a wild eagle she is in nearly feather perfect condition. No more unsure landings banging up her tail and wing feathers.

She spent the better part of that day roosted out front and shortly after 5 p.m. she headed towards the river to roost.  There have been very few days that we haven’t seen her on the property since her return and most mornings she is waiting on top of the aviary for breakfast at the very first light. However, after looking at recent telemetry we know she made few trips away from the aviary with some quite remarkable data to show for them.

She flew back to the Salt Fork River where she had been staying but came back the following day. Her telemetry path there and back was just over 200 miles round trip. She has made shorter trips as well near Harrah where she had stopped for a bit before coming home. Of course, she also spent some time on the river near the Iron Horse Bridge. Today she is in theDale bottom on the North Canadian River just north of the Grand Casino. This is the longest stretch of time she has stayed in the area near the aviary since last winter and that is a good indication that this will be her winter territory. We couldn’t be happier.

But apparently we aren’t the only ones. We noticed several migrant bald eagles in the area and Wadase had successfully run off a pair that were trying to roost in the aviary pasture, but there was one small male that stayed. He perched in the cotton wood tree out front and she made a direct flight towards him. At the very last second he ceded his perch for his own safety as she came in, talons first, just missing him. 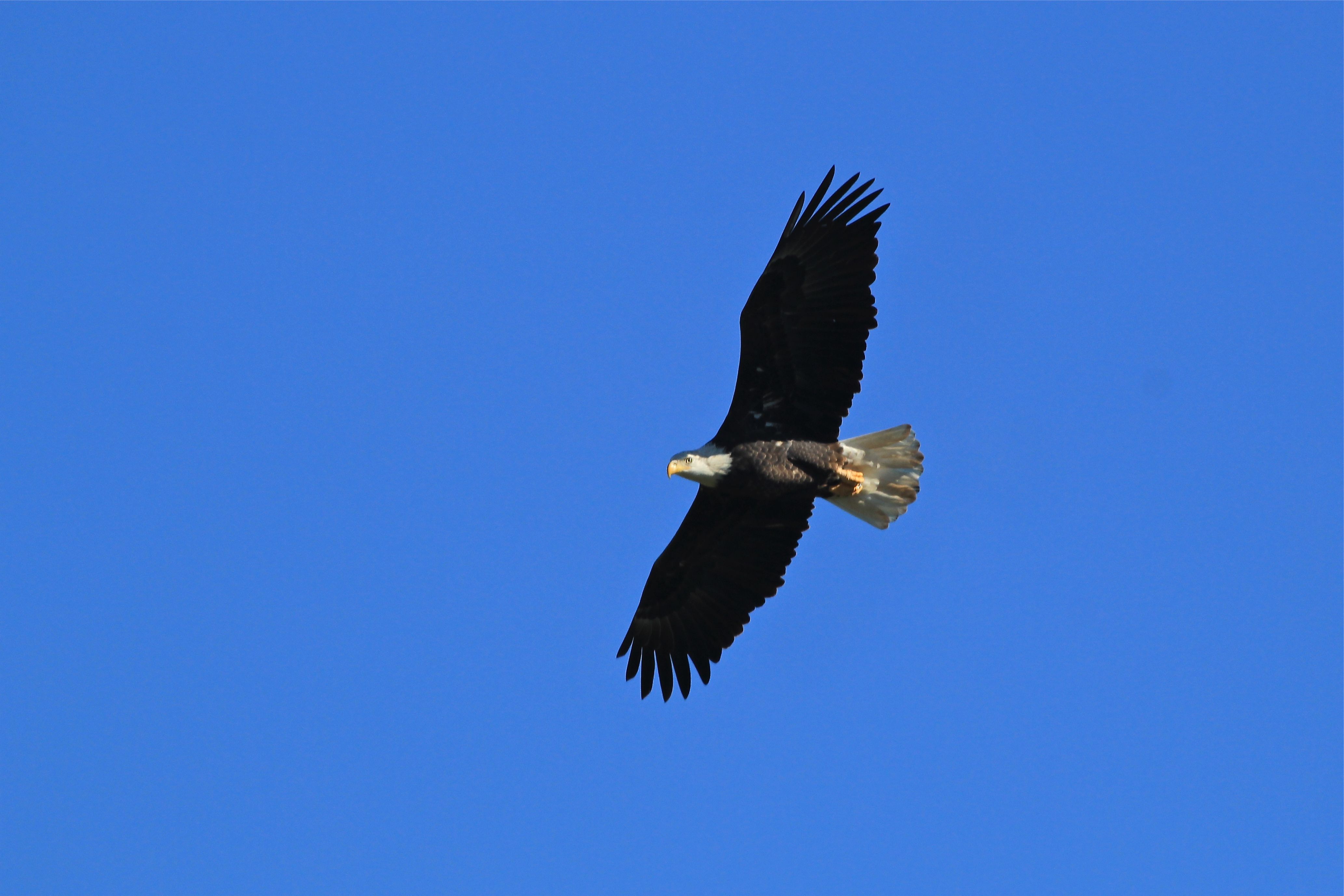 Wadase was very vocal and initially disapproved of his presence but he has been persistent and stayed close by. Often he would perch in the opposite tree line where he could keep an eye on her and each time she moved he would move to keep sight of her. She has started to tolerate him perching high in the tree above her and she has followed him curiously when he has gone across into the east pasture to roost. Although it is a bit early for Wadase to choose a mate, it certainly is possible. The male appears to be about four years old, indicated in the few dark streaks in his tail feathers and while his head is not completely white.

If our estimation is correct, he would be just beginning to find a mate himself. He is a beautiful, healthy bird and a brave one from what we have seen. He will have to be if he is going to completely win Wadase over. We feel privileged to have the opportunity to continue to document and share all of this as she matures, as it is a rare opportunity we may never experience again.

To follow her movements with us you can visit www.arcgis.com/home and search for “Potawatomi eagle”.