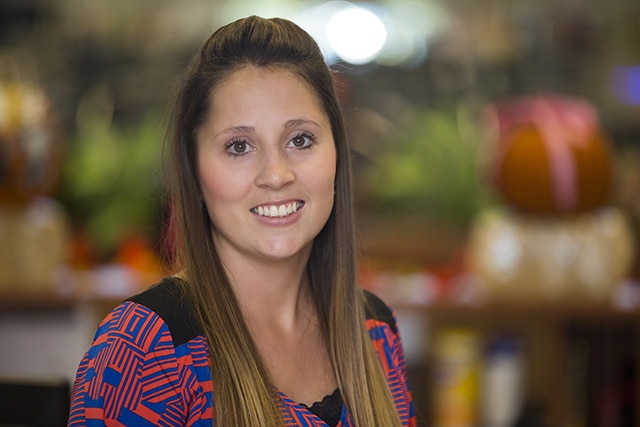 November 14 was World Diabetes Day, which raises awareness about the risks associated with the prevalent disease. For Native Americans, it is a disease that can greatly impact the quality of life, regardless of age.

According to www.diabetes.org, nearly 16 percent of American Indians and Alaska Natives have the highest age-adjusted prevalence of diabetes among all U.S. racial and ethnic groups. That is a statistic that impacts the bottom lines of both public, private and tribal health providers who cater to this vulnerable demographic of American society.

New CPN Health Services Diabetic Dietitian Rochelle Plummer is at the forefront of the Tribe’s efforts at slimming down these statistics.

A lifelong resident of Moore, Okla., Plummer joined CPN in the summer of 2014 after the completion of her undergraduate and graduate degrees from the University of Central Oklahoma. During her time at UCO, Plummer studied with current CPN Dietitian Torie Fuller.

Upon graduation, Plummer worked as a tube feeding specialist for a private healthcare firm, where she taught new patients how to use their equipment, calculate their needs and help determine the best course for each individual patient. Though she enjoyed her time working with the patients, Plummer found herself disliking the business-side of the position.

“It wasn’t really what I thought it was about when I went into it,” she explained. “I wanted to be more about the patients, and that position was about that and the sales numbers for those patients.”

“I had worked at the Indian clinic and really, really liked it. I wasn’t able to get a job there, but Torie (Fuller) told me about her work here at CPN and I didn’t hesitate to apply,” said Plummer.

Plummer, who is a registered and licensed dietitian, says that much of her work in the coming months will revolve around CPN’s new intergenerational community garden.

“I’m really looking forward to teaching everyone how they can grow and cook their own food. We especially want to encourage more produce in their diet.”

Stemming from her conversations with clients and the general public, Plummer and fellow healthy eating advocates stress that a more balanced diet is key to a healthier lifestyle. This doesn’t mean all vegetables all the time, but rather a proportionate amount of vegetables to go with other staples like meat and carbohydrate heavy items.

“The more well-balanced your diet is, the more likely you are to prevent diabetes,” she said.

Until that spring harvest though, Plummer can be found accompanying her fellow dietitian and former classmate Fuller on shopping tours of FireLake Discount Foods. The two UCO-graduates visit the grocery store with their Diabetes and Healthy Heart program participants and help them find healthy items to use in their cooking class demonstrations.