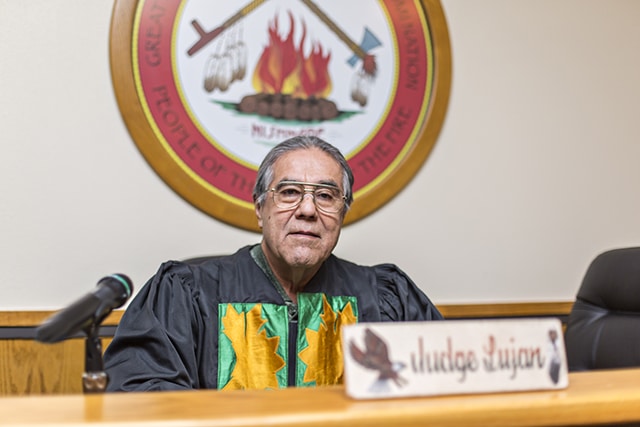 When an email arrives requesting a decades-old article be found where an individual is referred to as “the hammer of justice,” a certain interest is piqued. This reference centered on the career of CPN Chief District Judge Phil Lujan, who was recently recognized by two separate organizations for his service to the law in Indian Country.

Weeks later, the AARP recognized Judge Lujan’s years of work in the courtroom as well. The enrolled Kiowa and Taos Pueblo descendent was honored at the group’s 2014 Oklahoma Indian Elders annual event for his work in establishing the first District Court of the Citizen Potawatomi Nation. Lujan’s service as a Magistrate for the Court of Indian Offenses for the Anadarko Region and courts of federal regulation in the Seminole, Chickasaw and Anadarko agencies was also recognized by the AARP.

The acknowledgments come as a sign of merit for the Mountain View, Okla.-native’s career in helping to develop the structures of the rule of law in Indian Country.

“I was full of oats or beans, one of the two,” Lujan stated, recalling his early days as a law school graduate out of the Indian Law Center. “When I started, it was the genesis of what Chairman Barrett means when he says, ‘without law, tribal council meetings are a family reunion gone bad’.”

Though times are more stable now, with legislative and executive elections occurring with little animosity, there were instances in the past where Tribal politics lead to standoffs between factions in what was then the Citizen Band of Potawatomi. As tough as those times could be though, Lujan has always able to keep a sense of perspective. Lujan experienced trying times before donning the judicial robes, serving in the U.S. Army during the Vietnam War.

Timing is everything to Lujan, who like many men of his generation, can still recite his U.S. Selective Service number in a manner which sounds strikingly like it was rehearsed in Iambic pentameter. Whether it was his induction into the U.S. Army at the height of the Vietnam War, his placement at the University of New Mexico Law School by chance of a scholarship for Native American law students or his presence in Oklahoma when federal courts wiped clean the established practices of law in Indian country, Lujan associates his path with being in the right place at the right time.

A graduate of Washburn University of Topeka and law school at the University of New Mexico, Lujan was teaching at the University of Oklahoma prior to the change in Indian law following the late-1970s White Eagle case. For decades, Oklahoma had contended that Courts of Indian Offenses, originally established in 1886, no longer existed because tribes retained no authority over their former reservations. However, in the White Eagle case, Indian law experts discovered Oklahoma’s 1907 state constitution never established state power over Indian country. A federal court agreed.

“Like throwing a switch, the whole topography of Indian law in Oklahoma changed dramatically in less than a few months,” explained Lujan.

What emerged was Code of Federal Regulations 25, subsection 11.102. As explained in layman’s terms by Lujan, “Where there is no law and order, the Bureau of Indian Affairs could establish courts of Indian offenses for the benefit of Indian people.”

This provision led to the re-establishment of these misdemeanor courts specifically serving the state’s Native American population. Though Indian courts have their critics, their existence is keeping with the sovereign status of tribes as viewed by the U.S. government. These courts can take into account cultural nuances, especially in family matters, where a state or local court cannot.

“For example, I grew up spending vacations and weekends sleeping in a room with a bunch of relatives and cousins,” said Lujan. “This is normal for my family and tribe, but it technically is different in terms of housing standards that the state applies. I can take things like that into account, which is important culturally for Native Americans.”

Short on funding but long on qualifications and interest in the new venture, Lujan was convinced to serve as prosecutor to the court by mentor Browning Pipestem, an Otoe and Osage tribal member who would serve as magistrate in the newly established court.

“I was what you called a hippy Indian lawyer at that time, so I was up for something new,” said Lujan. “Browning and I paid for our own gas and lunches and we travelled quite a bit to get the courts going. But those experiences provided me an arena to practice my trade as a lawyer and then a magistrate. But it all happened because I was in the right place, Oklahoma, at the right time.”

Lujan spent five years as prosecutor prior to donning the robes as a magistrate in 1985. By this time, court officers had begun receiving a monetary compensation for their time. As was the norm for spending in Indian country at that time in American history, the funds were less than substantial.
“Oh it was money,” said Lujan. “Enough to buy you a lunch.”

Paid lunches weren’t the only result of his work in the Indian offenses court though. During this time Lujan continued to work at the University of Oklahoma as an assistant professor. The longer his judicial career went on, the more often disgruntled patrons of the court pressured the university to fire him.

“Again it was all about timing for me. At that time OU was rehabilitating their image with Native Americans. They once had a habit of hiring East Coast anthropologists and academics who came into the state, used the tribes for their studies and then never spoke with the tribes again. By the time I got there, the dean realized that firing me over something they saw as a civic service might be a bad idea,” Lujan added.

His seat on the court of Indian offenses, though named for the town in western Oklahoma, encompasses the Shawnee-Tecumseh, Okla. areas, including the Citizen Potawatomi Nation. This proximity resulted in Lujan’s initial affiliation with CPN and the Iowa Nation, who during the mid-1980s, shared a court system.

When he began his term as CPN District Court Judge in 1985, factionalism and electoral disputes were a paramount concern for the Tribe. More than thirty years in that position have provided him with numerous examples of CPN’s progress in establishing its current form of government. One instance stands out to him though, which Lujan identified as the first step in the Tribe’s maturation as a stable Tribal government.

Weeding in his garden one afternoon in the late 1980s, Lujan received a call from police officers from the Bureau of Indian Affairs. During a tribal council meeting, a dispute over leadership erupted and separate factions had barricaded themselves inside different parts of the old tribal headquarters. Judge Lujan, still wearing his dirt soiled gardening clothes, secured the public announcement system of the building and had the BIA police officer read a statement.

“Judge Lujan and the court have taken over this meeting, and it is suspended. It will resume in the tribal court in two hours!”

“The Potawatomi are an interesting people,” said Lujan as he recalled the day’s events. “Some tribes might keep fighting, but upon hearing that announcement they all stopped and headed to the court.”

As Lujan and many Potawatomi in leadership positions then and now recall, it was the first step in many in which the governing structure of the Tribe was established. Judge Lujan, with representatives from each faction, examined the Tribe’s governing documents to establish the correct leadership according to the law.

“There was an ignition point where things could really get bad,” said Lujan. “That is why, as Chairman Barrett says, we must have a law to govern ourselves’.”

So while the Tribe and its elected government have rightly been praised by organizations like Harvard University’s Governing Nation’s Project, without the work of competent judicial officials like Lujan, the foundation upon which the Tribe currently operates might not exist. A glance at some of the state’s less functional tribal governments is a testament to that.

Thirty years after his career in the courts began, Lujan emphasized that that he’d do it all over again as he reflected over the recent recognitions by the AARP and NAICJA.

“It’s an easy answer. I know it sounds corny, and I don’t mean it this way, but everything worked out because I happened to be in places where I could be part of something historic happening.”