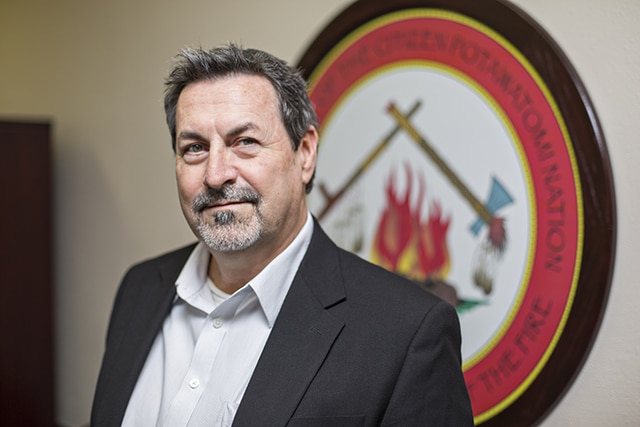 As the state’s tribes become service providers in large stretches of rural Oklahoma, tribal governments are making greater efforts to consult with one another to better understand issues impacting them, regardless of location. One area where consultation and collaboration is increasingly paramount is information technology, as Oklahoma’s tribes diversify their interests past gaming into sectors like broadband internet.

CPN’s Director of IT, Dennis Dyer, has long been a proponent of such collaborative thinking, making it a small surprise when he was elected as the first president and chairman of the new Oklahoma Native American Technology Council.

The group’s founding stemmed from initial frustrations amongst tribal IT professionals in learning more from state and federal regulators about establishing broadband internet services in Indian country.

“We felt like as individual tribes, we were not getting all of the information we needed to make decisions,” explained Dyer.  “Thus we started meeting monthly and extending invitations by word of mouth. Numbers grew so we decided to formally organize as a technology council and work together to speak as one voice to state and federal entities.”

The ONATC officially formed as a 501c6 organization in mid-2014, drafting bylaws and holding its first elections shortly after. Dyer, who has been with CPN for two and a half years following two decades in the private sector, was elected for a one year term.

“We try to focus on issues and opportunities that effect tribal growth and prosperity like technology, health, economic development and any other item that is related to building a stronger tribal infrastructure,” Dyer.

Members of the ONATC typically have a direct line to their respective tribal governments’ leaders, making the group’s meetings an incubator for innovative ideas that can be shared throughout the state. Alongside these individuals, ONATC’s advisory council of vendors, educators, healthcare professionals and officials from state and federal agencies provide input on issues connected to technology and tribal economic growth.

For now Dyer continues to head the group’s monthly meetings and encourages the brightest minds from the state’s tribes to attend a gathering. Typically the issues facing one tribe in Oklahoma will face them all at some point. The need for collaboration isn’t limited to only tribal officials, as the ONATC is always on the lookout for people on the advisory council too.

“It is not a forum for sales pitches,” he said. “It’s a forum for those looking for ways to help tribes solve problems, look for opportunities and ultimately prosper.”

Though under construction, www.ONATC.com will soon be online. Until then, any information regarding the Oklahoma Native American Technology Council are encouraged to contact Dennis Dyer at dennis.dyer@potawatomi.org.