CPCDC picks up where state government left off with Okla. Indian Nations Directory 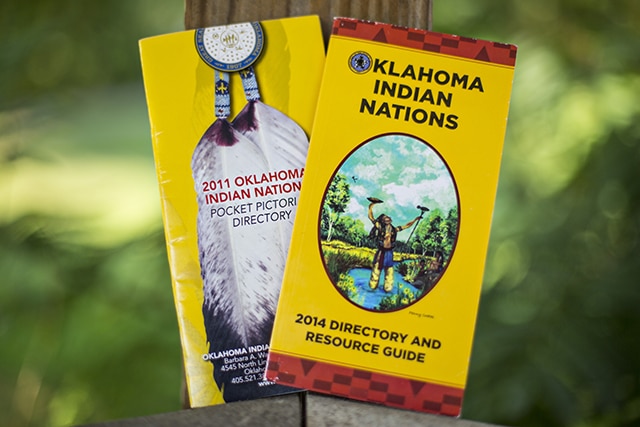 From 1967-2011, the Oklahoma Indian Affairs Commission, as part of its mission to facilitate dialogue between the state government and tribal governments, compiled up to date information on the state’s tribes, their leaders and jurisdictions. By 2011, despite it only having two full time staff members, political winds at the state capitol with a focus on cutting government spending resulted in the Commission’s dissolution. Its role was replaced by a Native American liaison position inside the executive branch. With the Commission’s cessation, so ended its annual publishing of a directory containing information on the state’s tribes.

Shane Jett, a Cherokee tribal citizen, understood the importance that the directory played in his work as District 27 Representative from 2004-10. Now head of the Citizen Potawatomi Community Development Corporation, the country’s largest Native American community development financial institution, Jett decided to use his present organization’s resources to replace a tool he’d once seen as an invaluable asset during his time in the state house.

“Frankly, we at the CPCDC decided to produce it because I got tired of complaining that no one else was printing it any longer,” explained Jett in his office at First National Bank and Trust Co. in Shawnee. “Chairman Barrett had once been on the board of the Indian Affairs Commission, and we agreed that the loss of the directory was another unfortunate result of the decision, one which I consistently voted against.”

At first glance, the small booklet doesn’t appear that substantial. However, the breadth of information inside, coupled with the extensive time spent compiling the directory, reinforces the former state legislator’s high praise.

Said Jett, “If there is any legislation impacting tribes, for example compacting, all you had to do is pick it up and call the tribe you need to speak to. Executive Director Barbara Warner and her staff really had something special in the directory they produced. It really was an invaluable resource.”

With Jett’s guidance and hundreds of hours of research and writing by Special Projects Coordinator TaRena Reece, the CPCDC recently completed printing of the 2014 Oklahoma Indian Nations Directory and Resource Guide. It is the first time such a work has been printed since 2011.

“At first the massive reality of the project did not sink in thoroughly,” said Reece, who is also a CPN member. “I was given a stack of papers, a large notebook and pointed to an Excel file containing information which the late Ms. Sharlean Haney, who was a Miami Tribal member, had been working on before her passing. It took me a few days to absorb everything, trying to make heads or tails out of what I had been given. It was a huge undertaking but very exhilarating.”

Reece and Jett, along with support other members of the CPCDC, spent a year researching and compiling the pertinent information before producing a first draft. Reflective of her attention to detail, Reece glued the initial draft’s pages together to provide the printers an exact format on how exactly the directory should be laid out.

The 2014 Oklahoma Indian Nation’s Directory and Resource Guide contains information on all 38 of the state’s tribal leaders, jurisdictions, contact numbers and websites. There is a foldout state map indicating each tribal government’s jurisdiction as well as contact information for Oklahoma’s Congressional Representatives, state legislators, members of the U.S. Senate on Indian Affairs, officials from the Bureau of Indian Affairs, First Nations Development Institute and other groups relevant to tribes and their members.

“We wanted anyone picking this directory up to recognize that we are dependent sovereign nations with their own languages, cultures and traditions. To reinforce that, we’ve included a greeting and other simple phrases on each tribe’s page in their own language,” said Jett.

The directories are available through the Citizen Potawatomi Nation’s Community Development Corporation for seven dollars, and can be order by visiting their website www.CPCDC.org or by calling 405-878-4697. Each of Oklahoma’s state and national legislative offices have been sent one, free of charge, in hopes of facilitating a better dialogue between the state’s elected representatives and tribal governments.

“Ultimately,” said Jett, “there is a need to cultivate a dialogue between the state government and tribes. Having this directory on someone’s desk may be just the spark needed to get that dialogue started.”