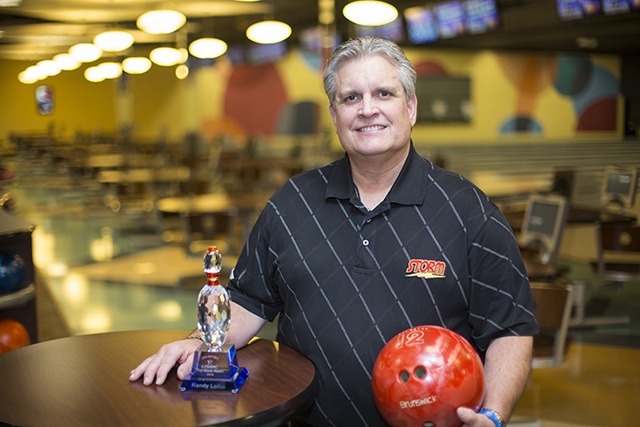 It has been a busy couple of years for FireLake Bowling Center’s Randy Loftis. The Shawnee-Okla. native is a regular figure on the bowling lanes around Oklahoma as a competitor in amateur and semi-professional tournaments. He spent the better part of the summer of 2014 helping out with the bowling center’s hosting of the PBA Summer Swing Tour, and is now gearing up for another year as youth coach for a number of high school teams around Pottawatomie County.

For this and numerous other contributions, it came as little surprise when Loftis was named by the Oklahoma chapter of the U.S. Bowling Congress as the 2014 Trail Blazer of the Year.

“I’m a lifer when it comes to bowling,” explained Loftis. “My background started around the age of five when Shawnee opened a new bowling alley. Growing up and working in the family awards business at Shawnee Trophy Co., the sport was the backbone of our work for a long time.”

Shawnee Trophy Co. is a household name in Shawnee, and is currently owned and operated by Loftis and his wife Ruthi. A longtime stalwart in the local bowling scene, Loftis was the Shawnee Bowling Association Secretary and Manager for more than a decade.

He joined FireLake Bowling Center in 2011 and promoted his love for the game, which has ebbed from its nationwide popularity in recent decades, with local youth around Pottawatomie County. Loftis was instrumental in helping FireLake Bowling Center become the home lanes for high school teams from Tecumseh, Shawnee and Bethel Acres in 2013.

Along with Director of FireLake Bowling Center Chris Skillings, fellow Shawnee-native, the state-of-the-art facility has become a mainstay for professional and amateur bowling events year round. In the past eight months alone it has hosted the PBA Grand Casino Summer Swing, the Mark Harmon Celebrity Bowling Event, and the PBA Southwest Regional, whose pro-am event raised $52,000 for the Shawnee Big Brothers-Big Sisters organization.

“Whether it was growing up doing it, building the trophies at Shawnee Trophy Co., running tournaments or volunteering to help build the sport, bowling has been a big part of my life,” said Loftis. “But ultimately I just enjoy volunteering to make bowling a better experience for whoever is interested. For me, it is just about the fellowship it brings.”

If you would like to learn more about youth or adult bowling opportunities at FireLake Bowling Center, please visit www.FireLakeBowl.com, like them on Facebook or call 405-275-0404. If you’re interested in learning more about Shawnee Trophy Co., they can be reached at shawneetrophy@sbcglobal.net or 405-273-0504.