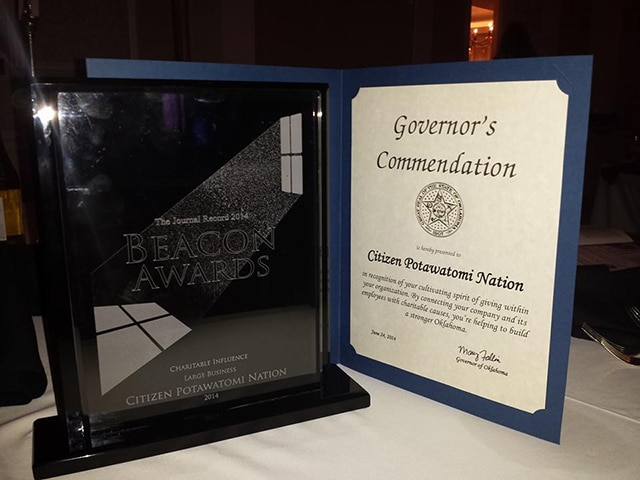 The two awards from the evening.

Amongst a ballroom filled with several hundred representatives of the state’s most influential companies, The Journal Record newspaper honored the Citizen Potawatomi Nation for its charitable influence in Oklahoma in the past year.

“Being nominated alongside firms like OG&E, Verizon Wireless and so many others is an honor in itself,” said Jason Greenwalt, Director of Executive Operations. “But having our tribe and employees’ charitable giving recognized by Governor Fallin and The Journal Record just shows this Tribe’s commitment to supporting our local communities in Pottawatomie and Oklahoma counties.”

Greenwalt, who accepted the award on behalf of CPN at the Skirvin Hilton Hotel at the 2014 Beacon Awards, praised the efforts of the tribe’s leaders and employees.

“Without God, none of this would be possible. But I would also like to recognize our leadership in Chairman John Barrett and Vice-Chairman Linda Capps. They set an example for us who work for the tribe. Being honored with this award reflects our commitment to that example of giving back where we can.”

The tribe was also awarded a commendation by Oklahoma Governor Mary Fallin in recognition of CPN’s spirit of giving as a business.

“By connecting your company and its employees with charitable causes,” it read, “you’re helping to build a stronger Oklahoma.”

“Our commitment to this community is deep and we believe that we all have to come together if we want to have the best community possible,” said Vice-Chairman Linda Capps. “As the largest employer in the county we believe we should lead by example. Whenever we have the chance to lend a hand, we’re there. Our employees don’t need much encouragement to help this community. They love it here and consider it home.”
According to The Journal Record, who organizes the event, “The 2014 Beacon Award winners epitomize the spirit of giving through numerous ways, whether it be helping out with immunization and dentistry needs for some of the state’s most needy populations, promoting education or instilling a culture of giving within their businesses.”

Organizations were recognized in large, medium and small divisions for their contributions to the nonprofit community in the categories of philanthropic impact a nd charitable influence. The large business subcategory represents entities with more than 500 employees.

The areas falling under CPN’s jurisdiction are largely rural, with Pottawatomie County’s poverty rate being 18.1 percent. Oklahomans in these hard-to-serve areas face a number of obstacles in obtaining services and opportunities available to those in larger metropolitan areas. CPN’s employees, who mainly reside in these areas, live with this reality every day.

A leader in charitable giving in Pottawatomie County, the tribe helps 175 charitable and civic organizations each year through volunteer hours as well as monetary and food donations.

Since 2005, CPN has donated more than $5 million to approximately 200 community organizations who serve Native and non-Native populations in the surrounding areas.  Of its 2,200 employees, 65 percent regularly contribute time and money that help keep local charitable organizations running.

Tribal employees can be found serving meals each month at the Shawnee Salvation Army soup kitchen or providing free Thanksgiving and Christmas dinners at the organization during the holidays. In May 2013, the tribe and its employees sprang into action following the tornadoes and floods that struck rural eastern Oklahoma and Pottawatomie Counties. Employees donated $5,000 to the American Red Cross, prepared meals for first responders and manned numerous tribal offices that were donated free of charge to FEMA and other organizations.