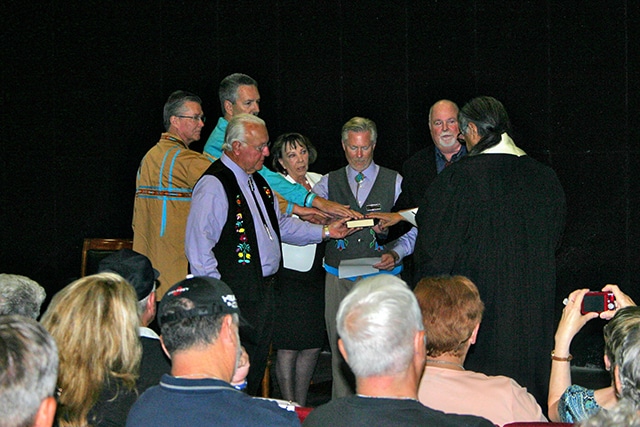 Offices for Vice-Chairman, Secretary-Treasurer and Legislative Districts 5, 6, 7 and 8 were all on the ballot during the 2014 election season, though only incumbents Dave Carney (District 8) and Mark Johnson (District 7) drew challengers. In District 7, first time candidate Michael Bourbonnais of Fresno, Calif. ran while Vancouver, Wash.’s Clyde Slavin again challenged for the District 8 seat.

When the votes were finally tallied, both incumbents emerged victorious. District 7’s Johnson defeated Bourbonnais by a vote count of 110 to 31.

“I am truly honored and humbled by the trust and responsibility that the members of District 7 have placed on my shoulders,” Johnson said after his re-election
Bourbonnais also provided a statement.

“The campaign for Potawatomi people does not end here. I will continue daily prayers and work for our people to pick-up things left behind or discarded, to strengthen our government and services, and to represent Potawatomi in a good way that our ancestors and future generations approve. Neta nwi dodaske se gi Bemadsejek mine gi Kekyajek emikwendemyan ge winwa. Mine endotmoyan gi Naganijek emnonaganiwat wegwendek ezhechkewat se gi Bemadsewnenan. Hau iw enajmoyan.”

“I’d like to thank the voters of District 8 for returning me to the Legislature,” said Carney. “I promise to work hard for our district and the Nation as a whole over the next four years.”

“I appreciate everyone who took the time to vote,” commented Slavin. “Please support Mr. Carney in his work. I intend to continue the effort to facilitate change through constitutional revisions that will improve all Citizen Potawatomi’s living standards. Equality in representation by our elected officials is needed to aid in unity and the distribution of services and finances made available through sound investments of tribal income. I am calling for a constitutional convention made up of interested members from each district to seek options to changes for every Citizen Potawatomi.”

The confirmation vote of Justice Jane Braugh to the Citizen Potawatomi Nation Supreme Court was also on this year’s ballot. Justice Braugh was re-confirmed by a vote of 1,406 to 67.

Also approved was the 2014 Citizen Potawatomi Nation’s set aside budget, with 1,299 voting for and 73 against.

Vice-Chairman Linda Capps retained her seat for another four year term after no challengers filed ahead of the January 2014 deadline. Capps has served in the Tribe’s leadership bodies since 1990.
Incumbent Secretary-Treasurer D. Wayne Trousdale also filed in January to retain his seat. Trousdale drew no challengers and will be serving his fourth term as Secretary-Treasurer.