What to know about regalia, dancing and Grand Entry 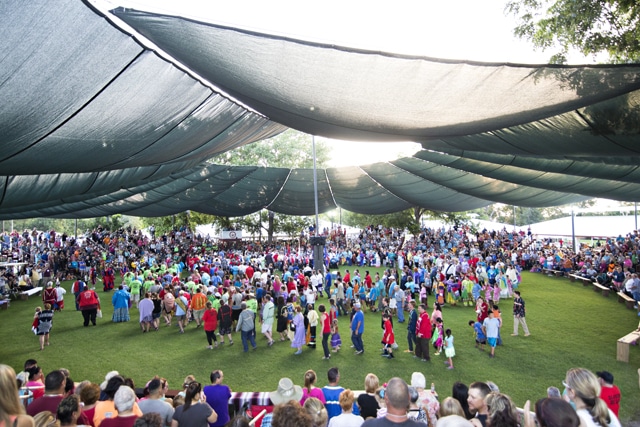 Family Reunion Festival is just around the corner, where Potawatomi from across the country descend on Tribal grounds in Oklahoma to meet, eat, dance and greet. Though activities ranging from language classes to hand games will take place from June 27-29, the focal point of the gathering is Saturday evening’s Grand Entry and dance contests.

A closed event for Citizen Potawatomi the last 16 years, the Family Festival was originally one of the premier powwows in the nation. It drew Native Americans and non-tribal attendees from across the U.S. and Canada.

Due to a lack of Citizen Potawatomi participation in the cultural aspects of the event, specifically regalia and dancing, the event was changed to give Tribal members a better opportunity to participate.

“Right before we changed it, Chairman Barrett said that the last time he went into Grand Entry and
looked around, he realized that there were no Potawatomi in the circle,” recalled Tribal elder Mary Powell. “They were all up in the stands watching. It isn’t like that today. Nowadays, the biggest concern is that people are wearing traditional clothing and not just tank tops and sandals.”

Grand Entry and the dance contests in recent years have become a mosaic of colors, regalia and dancing styles, the majority of which are worn by Potawatomi. Tribal employees who are members of other federally recognized tribes also participate in the dancing on occasion, though prize money in the dance contests is strictly for CPN members.

Coby Lehman, a Curly family member and CPN cultural activities coordinator, is a long time dancer. He oversees the music and dancing during Festival as Arena Director.

Grand Entry is a celebration to show that our Potawatomi people and families still exist after 500 years,” explained Lehman. “Powwows like the one we have at Festival aren’t ceremonial, but more celebratory.”

Given the presence of 38 tribes in Oklahoma, almost all of whom originally come from various parts
of the continent; tribal powwows like Festival tend to mix dancing and songs that may not be considered traditional to one particular tribe.

For instance, in the hour before Grand Entry begins, tribal members and employees participate in the Gourd Dance, which is a Kiowa tradition. Following Grand Entry, there are four round dance songs, an Honored Families dance, Tiny Tots dance, before the men’s and women’s dance competitions.

To compete for the prizes in the dance competitions, dancers must be CPN members and dressed in full regalia.

“The five judges base their scores on appearance, whether dancers are on beat with the drum, how well they are flowing with the music and if they stop with the drum,” said Lehman. “Proper dress is required, specifically no bare feet! Women should wear a shawl or a dress, while men should wear a ribbon shirt and slacks.”