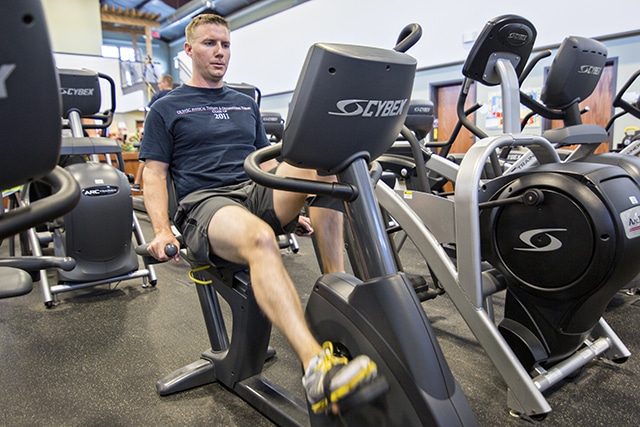 The contest is open to 64 participants who must be a member of the FireLake Wellness Center. Competitors goes head to head against an opponent for one week in a competition to get the most miles on the stationary bike, elliptical machine or treadmill. The person accumulating the most miles by the end of the week advances to the next round.

The competition has garnered so much attention that tournament officials asked the Tecumseh Middle School Math Department to develop a formula to level the playing field. The math department’s goal was to figure out a way to correctly compare the miles done on each machine.

They finally came up with a formula showing that for every mile on the treadmill, contestants on the stationary bike will have to go 2.3 miles, and those using the elliptical machine need to go two.

There are two brackets for competitors, a 39 years old and younger group, and a 40 years old and older group. The two winners of each bracket compete against each other for the championship.

Deathridge came out on top this year and was the overall winner.

“My goal at the beginning of the competition was to make it to the final four,” said Summerlin. “Having accomplished that, I feel great about the effort I put into the competition. March Madness pushed me to another level in my cardio exercise.”

The competition is in its sixth consecutive year with contest winners receiving anything from iPods to flat screen TVs.

“March madness during the night shift turns into pure chaos,” said FireLake Wellness Center employee Brandon Edwards. “It’s a great contest with people pushing themselves beyond what they can normally do. I really enjoy watching them compete against each other and look forward to it every year.”