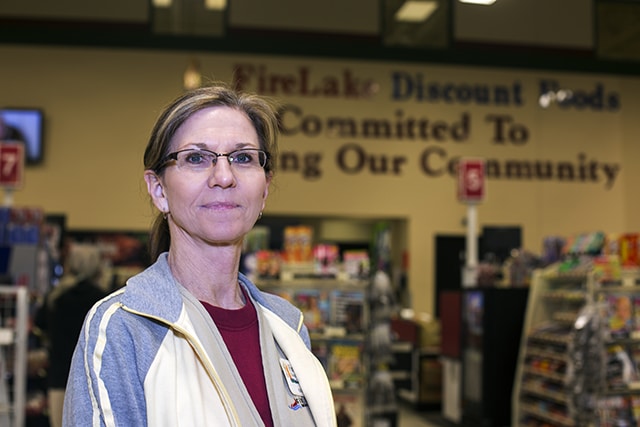 Although tribes have started to build a diverse portfolio of businesses, a grocery store isn’t usually the first thing that come mind. However, for the Citizen Potawatomi Nation grocery has been a booming business and FireLake Discount Foods is the largest tribally-owned grocery store in America. Helping making sure FireLake Discount Foods customers’ needs are met is veteran employee Kay Bruce.

Employed by Citizen Potawatomi Nation for more than a decade, Bruce is the Customer Care Manager for FireLake Discount Foods, one of two CPN-owned grocery stores in Pottawatomie County.

Bruce has been in the grocery business for just more than 25 years, having previously worked at longtime Shawnee grocer Pratt’s before its closure in the early 2000s.

“At the time I knew some people that I had worked with who were at FireLake,” recalled Bruce. “I had heard good things about the store, that it was a friendly place, and that it was customer oriented. I wanted to be part of a grocery company like that.”

As customer care manager, Bruce becomes a catch all for the staff and customer’s needs. She is responsible for the operations of the cashiers and sackers at the front end of the store. Never in one place for long, Bruce can often be found walking up and down the cashiers’ lanes at FireLake Discount Foods, speaking with customers, managers and employees.

“We’re there to solve any problems that may arise,” she explained. “It goes without saying, but we’re there for our customers at any given moment, for whatever they need.”
Though the position’s fluidity means it is hard to define a normal, day-to-day set of actions, there is strategy behind Bruce’s role in the store.

“The key is, you have to get to know your employees. I oversee 70 employees and seven supervisors, and each is their own individual with a different personality. Getting everyone working together as a team is a good thing, for the store and our customers.”

Those employees and customers are Bruce’s primary focus, which consequently impacts the store’s success.

Looking back at her time working in the grocery business, the customer care manager originally from Quinton, Okla. is like many FireLake Discount Food staff members who laud the merits of working in the sector.

“FireLake is a great place to start young people who have no work experience,” said Bruce. “When they leave or grow with the company it helps them later in life. Workplaces like FireLake are great, because it is a place where you can learn, grow, and excel in life no matter what road you take.”