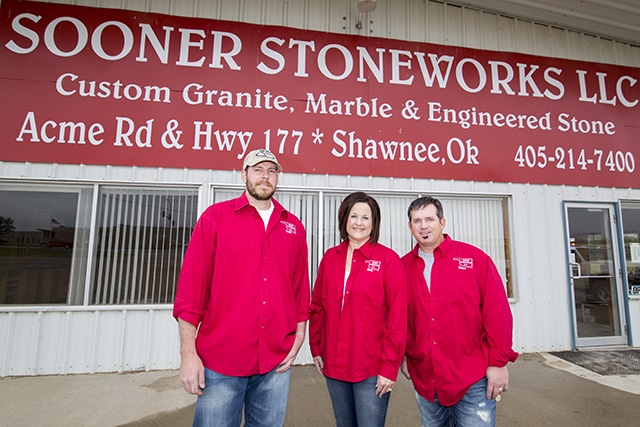 Counter tops, window sills, showers, fire places, and other stone pieces are the specialties of Sooner Stoneworks LLC, a Native American-owned business in Shawnee, Okla. Owners Scott Patten and Steve Taylor chiseled their company from the former Sooner Marble, Granite, and Tile. After some initial financing from the Citizen Potawatomi Community Development Corporation, today, the two head one of local community’s staple businesses.

Opening in 2002 in partnership with a trim and cabinet company, demand for the company’s stone counter tops and other pieces increased so rapidly that the firm switched its focus solely to stonework. Working with all natural and man-made stones and quartz, Sooner Stoneworks has five natural stone fabricators in their shop, located at Acme Road and Highway 177. Today it is the largest granite and marble fabricator in the Shawnee area.

Patten and Taylor first learned about the Citizen Potawatomi Community Development Corporation through a mailing. According to Taylor, the CPCDC has been a tremendous part of their success.

“Through different loans and a line of credit they have always been helpful in growing our business,” said Taylor. “Whether for material or machinery, they have always worked diligently to get us what we need. We truly appreciate the support of the entire staff.”

Lifelong residents of Tecumseh, Okla., Steve and Tracy Taylor have three daughters and one son. Steve previously owned his own business, Taylor Construction. Scott and Brandi Patten have been married for five years and have a one year old son, Jase. They currently live in Shawnee but are building a house in Tecumseh. Scott is a retired professional baseball player, but had previously worked with another granite fabricator before starting Sooner Stoneworks.

Secretary Mary Whiteman has been with Sooner Stoneworks from the start, and is the backbone of the company. Always on call, if the staff or a customer needs anything, no matter how big or small, Whiteman does all she can to get them what they need.

“We all need to eat,” said Whiteman. “Sooner Stoneworks has provided generously for our families and for the families of those associated with us. But since we all have to work, why not do something you enjoy?”

On each job, Sooner Stoneworks does its best to explain clearly the entire process of purchasing, fabricating, and installing counter tops. Pricing has been structured to be easily understood and they deal honestly when it comes to measuring and estimating what each job will take.  That forthrightness has won them many jobs. Potential customers will shop with other contractors and typically find that when they come to Sooner Stoneworks, the prices aren’t padded.

“It’s exciting to see each project come together and see people constantly amazed at the beautiful things God has hidden inside a mountain,” said Whiteman.

Sooner Stoneworks has seen prosperous and lean times, having largely navigated the worst of the past years’ economic downturn. While acknowledging their daunting prospects in those uncertain days following the 2008 recession, Whiteman quoted Luke 6:38, “Give, and it will be given to you. A good measure, pressed down, shaken together, and running over, will be poured into your lap. For with the measure you use, it will be measured to you.”

That faith has paid off, and as of today Sooner Stoneworks has gained most every major builder in Pottawatomie County and other surrounding areas. They serve large commercial firms, smaller individually run construction companies and according to Whiteman, have a “very healthy flow of walk-in traffic” from customers looking to remodel their home or who work independently from builders on their own projects.

The firm and its employees are supporters of a number of local schools, helping with fundraising campaigns, sports advertisements for students and yearbooks as well as individual youth sports teams. Sooner Stoneworks also supports a local Pottawatomie County Sheriff’s office publication warning students about the dangers of alcohol and drug abuse. The company is also a donor to organizations and programs supporting veterans, addiction recovery, local churches, youth groups and other ministry outreach. In its ongoing mission to spread the Gospel, Sooner Stoneworks has also helped build churches in Mexico and in Panama. The company’s inspiration for this work is a form of giving back in thanks of their own success.

“We believe that because of a principle of giving, we reaped a blessing in not losing any of our fabricators at our shop. We’ve kept a consistent flow of business in spite of the economic conditions,” stated Whiteman.

If you are interested in remodeling your home and want stonework done, give Sooner Stoneworks a call at 405-214-7400 or you can stop by and visit with Mary. Their hours of operation are Mon.-Thur., 9:30 a.m. to 4:30 p.m. and Fri. from 9:30 a.m. to noon. They make appointments to accommodate their customer’s schedules. Give them a call today!

CPCDC is a Native American lender for small businesses. If you would like to inquire about loans to help build your business like Sooner Stoneworks, please call us today at 405-878-4697 or visit our website at www.cpcdc.org.