The voices behind “Potawatomi Nation” 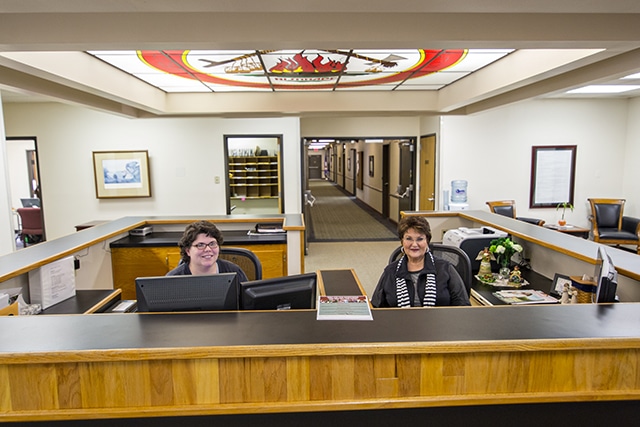 Located behind a large counter inside Citizen Potawatomi Nation’s administration building is where the voices of the tribe, employees Pam Smith and Sheila Goff, connect callers to the Tribe’s departments and enterprises. Though callers to CPN probably know them more by their recognizable phrase, “Potawatomi Nation,” Smith and Goff are key cogs in keeping the tribe’s day-to-day operations connected.

Smith, a lifelong resident of St. Louis, Okla., has been with CPN for nearly 18 years.

“Previous tribal employees, Donna Loudermilk and Bob Trousdale, are the reason I came to work here. I am forever grateful for them asking me to come to CPN. Working here has changed my life,” explained Smith. “I’ve witnessed so many other people’s lives changed here for the better. Whether it was a tribal member, employee or the community, the Tribe has a great effect on so many people. I’ve seen the Tribe continue to grow throughout the years and I’m just excited to be part of it. Citizen Potawatomi Nation isn’t just a job to me, it’s family.”

Goff, a tribal member and kin to the Battese and Lasley family, came with her family to Shawnee, Okla. as a toddler in 1980, and has worked for the Tribe since 2009.

“The Tribe has literally changed my life. I’m not sure where I or my family would be without them. My mother’s life was saved numerous times by the staff at the tribal clinics,” said Goff. “My brother-in-law worked in CPN’s Child Development Center and knew I needed a job for the summer. He directed me to Lynn Heath at the Employment and Training office in Tecumseh, Okla. Lynn was able to find me a temp position in Administration. I was expecting to go back to Gordon Cooper Technology Center for the fall semester, but I’ve been here ever since.”

Answering approximately 350 to 500 calls per day, the pair relies on each other to keep the calls from piling up and after a year and a half working side by side, Smith and Goff have developed a great working relationship.

“Pam is a dream co-worker and is very flexible to work with whenever any type of situation arises,” explained Goff. “She’s dedicated to the Nation and makes my job a pleasure day in and day out.”

Besides answering phone calls and transferring callers, the pair juggles a number of other things that help keep CPN running smoothly. They are responsible for overseeing the administrative office’s automobile fleet, bookings for the Tribally-run RV Park and other general use of meeting rooms and buildings at Raymond Peltier Park.

“Sheila and I do our best to not only assist visitors at Administration, but also direct calls as quickly and accurately as possible,” claimed Smith. “During Family Reunion week, we can receive up to 1,000 calls per day. It can be quite the task but we enjoy it. We love getting to meet many of the callers we have been talking to throughout the year. It’s nice to put a face to the people we get to interact with over the phone.”

Smith and Goff’s position as the first source of information for callers to CPN also gives them the distinct advantage of knowing many of the day-to-day goings on at the Tribe.

“I started a year ago at my position, but a day doesn’t go by that I don’t go to Sheila or Pam for information about something the Tribe is doing,” said Assistant Director for Public Information John VanPool. “Without people like Sheila, Pam and the other administrative assistants at CPN, everyone’s jobs would be infinitely more difficult.”