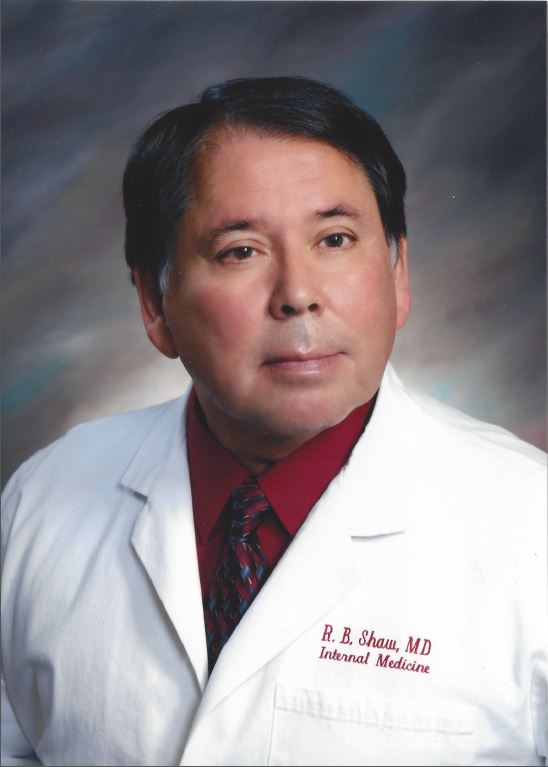 At a young age, Dr. Shaw remembers being fascinated by the natural world. As he grew older, the Tulsa, Okla.-native and graduate of Cascia Hall High School sought to pursue this interest as a professional calling.

“I always liked science and math,” he explained, “and as I got older, I thought it was beautiful to be able to couple that with a useful discipline that helps people.”

Following his high school graduation, he spent two years at Oklahoma State University before transferring his junior year to Dartmouth College. Shaw was drawn to the New Hampshire-based college’s Native American Program, which specifically provides student support services to Native American students. Also a factor was Dartmouth’s Ivy League reputation, which was an important factor in building up his credentials for his next stop; medical school at the University of Washington.

His time in Washington was an eye opening experience, where he soon learned that “Indian Country” was larger than what was happening in his home state.

“I realized pretty quickly that despite what we get used to here, Oklahoma is not the center of Indian Country,” explained Dr. Shaw.

His immersion with the peoples of the Pacific Northwest helped put Dr. Shaw’s own Osage heritage in perspective.

“Being around the other tribes, who are different culturally, really puts your own ways in perspective. You miss your own people’s songs, and while you might be Indian, you’re not Yakima. Most other tribes have their ways, which are good, but they’re not your ways.”

This sentiment played a part in Dr. Shaw’s return to Oklahoma, where for more than a decade he operated a private practice in the town of Moore. Eventually returning to his hometown of Tulsa, Dr. Shaw continued his work a specialist of Internal and Addiction Medicine before being approached by Director of CPN Health Services Tim Tall Chief about an opening for the position of medical director at the Citizen Potawatomi Nation. Tall Chief, a fellow Osage, knew of Dr. Shaw’s expertise from a previous role as Chairman of the Osage Nation Health Advisory and Authority Boards.

In addition to supervising CPN’s medical providers and healthcare policies, Dr. Shaw also oversees the credentialing of those providers. He sits on the CPN Health Services governing board, is an advisor to Contract Health Services and sees patients both at the tribal clinics. Now after more than two years in his current position as medical director, Dr. Shaw says that he wouldn’t go back to private practice. {jb_quoteleft}“Used to be, the Indian clinics were a place for young physicians to learn, while the pay and facilities weren’t close to state-of-the-art. Now, there is no drop off in pay, and with compacting, tribes can afford high quality staff and facilities. In rural Oklahoma especially, tribal health care has not only caught up, it has eclipsed private care and boasts the best facilities in town.”{/jb_quoteleft}

“Used to be, the Indian clinics were a place for young physicians to learn, while the pay and facilities weren’t close to state-of-the-art,” he explained. “Now, there is no drop off in pay, and with compacting, tribes can afford high quality staff and facilities. In rural Oklahoma especially, tribal health care has not only caught up, it has eclipsed private care and boasts the best facilities in town.”

CPN health services are compacted with the U.S. government through Indian Health Services. In practical terms, this means that federal funds allotted for tribal healthcare is overseen and distributed by the tribe itself. This localized management of healthcare funds allows tribes to prioritize what programs and needs their patients require without direct supervision from the federal level.

It is partially this experience with compacted health systems for CPN that has Dr. Shaw entering the race for a position in his tribe’s legislative body. Dr. Shaw will be running in the June 2014 election for the Osage Nation Congress as a candidate from the Gray Horse District.

“I have published articles on health and compacting of the Indian Health Service monies for Osages, but it is time for me to do more and to effect a change for the better,” said Dr. Shaw in his campaign announcement.

At the end of the day, the passion for science coupled with his dedication to helping those in need is reflected in his service, both at the health clinic and on the campaign trail. If successful in his bid for Osage Nation Congress, Dr. Shaw plans to continue his work at CPN, helping the tribe expand its offerings to all members of federally recognized tribes.