Ahead of the June 2014 elections at CPN Family Reunion Festival, the Hownikan editorial board interviews candidates in each of the competitive legislative races. Vice Chairman Linda Capps, Secretary-Treasurer D. Wayne Trousdale, District 5 Legislator Gene Lambert and District 6 Legislator Rande Payne all will be running unopposed. In-person voting will be held June 28 during the annual CPN Family Festival. The Citizen Potawatomi Nation Election Committee will mail absentee ballot request forms to all eligible voters after March 1, 2013. A ballot request form will be published in future editions of the Hownikan. 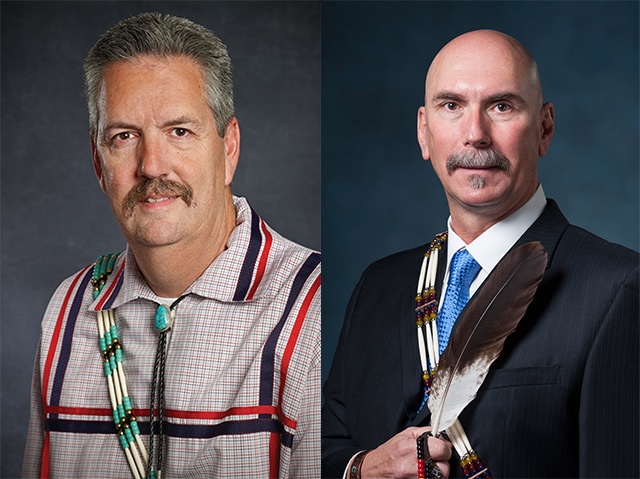 We spoke with incumbent Mark Johnson, Interim Fire Chief for the Fresno/Kings Unit of CAL FIRE and Chief of the Fresno Fire Protection District and his challenger, Michael Bourbonnais, a technology professional working for California’s third largest community college district.

If you win, how would you engage District 7 constituents to make them feel more a part of the tribe?

Mark Johnson – “I would continue the work I have been doing since I was first elected in 2010. Since District 7 is such a distance from Shawnee, Okla., members do not have access to all of the same services and benefits as those in Oklahoma do. The hardest part of my job as a legislator is not being able to fulfill the needs of our members in the western U.S. 100 percent of the time. I spend a good deal of time problem solving for our members and helping them tap into other resources outside of the tribe.
Our members also care a great deal about our collective tribal history and their family history; I have made it a point to provide meaningful guidance to those who wish to learn more about their heritage, along with serious matters like naming ceremonies, and the fun things like making regalia. Being able to watch those members connect with their heritage and family history, many for the first time, is very rewarding.”

Michael Bourbonnais – “First, I encourage eligible CPN citizens to participate in this election. In the last District 7 election every vote cast was by absentee ballot. Therefore, please request your absentee ballot and vote. This is not the American political system. You have a voice in CPN. (See last paragraph.) Next, think about these questions: What does being Nishnabe mean to you? What does Bodewadmik – People of the Fire – mean? What does being a citizen of this Neshnabe nation mean? What makes a Citizen Potawatomi different from the American? Not definition of terms; what do these things mean to you? We will discuss and answer these important questions for ourselves as we work together to make things happen in a good way.”

What is the most pressing issue you see facing the tribe?

Mark Johnson – “There are several pressing issues facing the tribe, one that will never go away is the job of protecting tribal sovereignty. As our Nation expands and strengthens its financial standing in the world, the state and local governments that the Nation deals with look for ways to challenge that sovereignty. Another issue is being able to sustain the economic growth the Nation needs to maintain in order to meet the needs of the ever growing population of the tribe. Not just now, but into the future.”

Michael Bourbonnais – “The most pressing issue facing the tribe – that deserves rigorous action – is cultural enhancement. We want to be connected with our tribal ancestors, history, language, culture, and current affairs.”

How would you propose addressing it?

Mark Johnson – “Stability of the Nation’s governmental branches, both executive and legislative. Stability gives confidence, not only to businesses who have dealings with the Nation, but to the people who visit our businesses and drive our Nation’s economic engine. It also sends a strong message to other governmental entities who may attempt to infringe on our tribal sovereignty that they will not have an easy task. A stable government is a strong government.”

Michael Bourbonnais – “Education and exposure: District 7 deserves a representative that is passionate about his Nishnabe heritage. One that is capable to help our people pick-up things left behind; to regain and enhance their sense of tribal belonging. During CPN Festival 2013, I spoke to everyone that would listen about enhancing our Potawatomi culture. I spoke to Legislators, Executive, CPN directors, the staff of the Hownikan and fellow Potawatomi. All agreed. We want our culture. Therefore, we are planning cultural-centered events throughout District 7. Themes will include traditional ceremony, language, cultural teachings, tribal and family history, talking circles, sharing, caring, and feasting the Potawatomi way. Celebrate our native heritage!”

Turnout is low in tribal elections given the numbers of registered and eligible voters. Why do you think it is important for tribal members to vote?

Mark Johnson – “Voting is how a free people, like the Citizen Potawatomi have a say in how their tribe is run. Since time began, and the eagle saw the prayer smoke rise from our lodges, we have all had a voice in how our tribe is run and the direction it would take. It is a serious responsibility that we should all take part in, and in doing so we honor our heritage and ancestors who made sure we were on the right path.”

Michael Bourbonnais – “Fortunately, our Neshnabe nation does not rely on bipartisan system of government. By tradition and constitutional design, each eligible Citizen Potawatomi can have a voice in our nation’s affairs. Our Neshnabek ancestors fought, and sometimes were killed, defending our peoples’ sovereignty. Equally, our contemporary leaders work hard to give us opportunity. As Potawatomi, as God’s uniquely created people, we honor those who came before us, our leaders and our blessings. We participate. Voting is our way to give thanks, to exercise political power, to be heard, and to leave legacy in a good way for our grandchildren and their grandchildren. Nin se Michael Bourbonnais.”