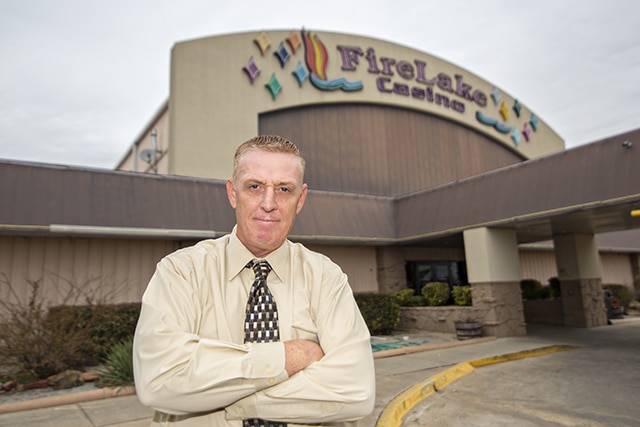 From Blackjack dealers to the cooks at the Bistro Grill, FireLake Casino is the workplace for dozens of tribal employees. The managerial staff at FireLake Entertainment Center has plenty of combined years of success. While each individual works as part of the larger team, those responsible for gaming operations fall under the supervision of Director of Casino Operations, Mike Petray.

At FireLake since 1990, Petray originally came to Pottawatomie County at the age of 17 from his hometown of Phoenix, Ariz.

“My sister was living in Tecumseh and I came out here to visit her and never left,” said Petray. “I really liked the small town, family vibe of the area. In relation to that, it’s the sense you get working for Citizen Potawatomi Nation. The Tribe has the feeling of one big family and it’s a big reason this place is successful and a great place to work.”

Like many supervisors of CPN enterprises, Petray worked his way up to director. He initially began his career at FireLake in the bingo hall. While there playing one evening in 1990, he and the hall director spoke and Petray mentioned that he needed a job. Less than 12 hours later he was FireLake’s newest employee.

“Times were different back then. There wasn’t any requirement to have an HR department or gaming license. You could get hired and fired at the drop of a hat,” said Petray. “I started out in janitorial services and did everything else in-between, before I became the bingo manager. With a little hard work and determination anything is possible when working for this Tribe.”

In between now and then, there was a small stint when Petray decided to try his luck within managing another casino. Linda Canada, General Manager of FireLake Casino, has worked with Petray for more than 15 years.

“When he first told me that he was leaving I started crying,” recalled Canada. “It was an initial shock to learn that someone that you’ve known and worked with for so long was leaving and wasn’t going to be around anymore. He had to work his way back up, but we’re just glad he’s back. We know that he’s the right person for the job.”

“I spent about three years away from FireLake,” Petray added. “The community and opportunities I knew I could achieve within CPN are what brought me back here. This Tribe, without a doubt, holds a special place in my heart and I’m thankful to be a part of the growing success once again.”

Outside of his CPN related work, Petray has also been the Assistant Fire Chief for the City of Tecumseh, Okla. for the past 15 years.

“Just like working my way up for the Tribe, I took a similar path with the fire department,” stated Petray. “I started out as a firefighter and continued up the ladder to get where I am today.”

With a desire to give back to the area, Petray is one of many CPN tribal members and employees that take their time off from work to engage themselves in bettering this community.