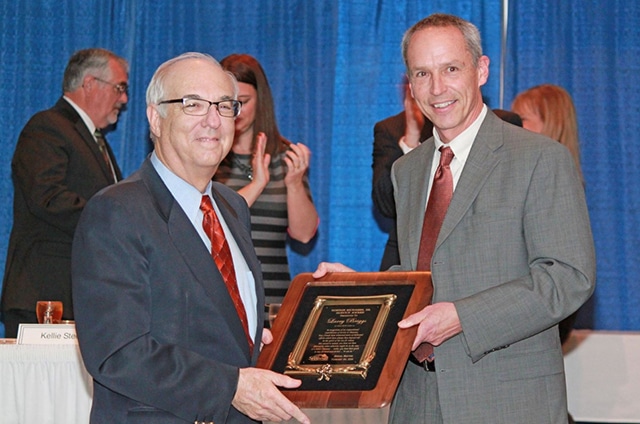 In 1984, First Oklahoma Bank, N.A. of Shawnee, Okla. opened with a capital structure of $2.5 million, a large portion of which was borrowed from a correspondent bank which failed amidst the banking crisis of the mid-1980s. For ten years, First Oklahoma Bank, N.A. lost money before a change was made that helped facilitate significant improvements that would eventually see the bank become a profitable enterprise. The man whose arrival helped kick start those changes was bank President and CEO Larry Briggs.

Briggs, originally of Cheyenne, Okla., is nearing his second decade as President and CEO of the First National Bank and Trust Co. An elder statesman of the Oklahoma banking community, Briggs’ quality of leadership is reflective of in both his longevity and FNB’s ongoing success.

He got his start in the banking sector at the Citizen State Bank of Morrison, Okla. with just ten hours remaining needed to complete his Bachelor’s Degree at Oklahoma State University. Convinced by the bank’s president Dwight Rymer to take on role as a management trainee, Briggs put off classes as he began his new role with the bank. His first task was as a check filer.

“It was the most boring job there is,” recalled Briggs as he described his early days at the bank. “But if you filed checks, you got to know your customers and how you could help them. You also learned their signatures, which meant you could make sure checks were not forged.”

Briggs held almost every position at one point or another at Citizen State Bank, from teller to a lending officer. By 1971, he came to the conclusion that he’d passed by his opportunity to finish his degree. After a two year stint at Stillwater National Bank in Stillwater, Okla., Briggs received another offer from , Dwight Rymer, his former boss. Rymer was in the process of purchasing a bank in the town of Holdenville, and he offered the 29-year old Briggs the opportunity to become the youngest bank president and CEO in Oklahoma.

“I told him, ‘Dwight, I’ve been in the banking business for five years, I’m only 29, and you’re going to make me the president of a bank? How smart is that?’” said Briggs.

Yet Rymer’s faith paid off again. The First National Bank of Holdenville under Briggs succeeded and even navigated some of the most treacherous years the banking industry faced during the oil boom and bust years of the 1980s. These were tough times for a banking industry that had heavily relied on investments in the energy sector, best epitomized by the infamous Penn Square Bank failure. Though the challenges were significant, Briggs and his employees put in countless hours in the aftermath of the crash to keep First National Bank of Holdenville going.

“There were plenty of long days during that time, but we were one of the few banks in the state to make a profit. We didn’t always make a lot of money,” Briggs said,” but we only used black ink.”

In 1994, Briggs was contacted about an opening at what was then known as First Oklahoma Bank, N.A., whose major shareholder was the Citizen Potawatomi Nation.

“Not being a Native American, I was a bit hesitant about running a bank for a tribe. But any reservations I had were put to bed pretty quickly, and since I’ve been here this long, I think that sentiment has borne out.”

First Oklahoma Bank, N.A., which was located in Shawnee, Okla., is now called First National Bank and Trust Co. Its seven locations in Oklahoma operate under the same regulations, restrictions and laws as every other FDIC insured bank in the U.S. does, despite misconceptions about advantages of tribal ownership.

When he came on as president and CEO in 1994, it had $27 million in assets. Today, it holds nearly ten times that amount. Under his watch FNB implemented a customer call program and a trust department. FNB also increased its loan volume by 250 percent while keeping a high credit quality.

Along with his work at FNB, Briggs has given back to the local community in Shawnee, the state and the nation. The former-Army National Guard artillery captain has been the President of the Oklahoma Banker’s Association, Chairman and Treasurer of the Shawnee Chamber of Commerce and Chairman of the Economic Development Foundation. He was the founding director for the Oklahoma Foundation for Excellence, and served as that organization’s treasurer and executive committee member as well. At the national level he has served on numerous committees and advisory roles with the American Bankers Association.

He also sits on the advisory board of Oklahoma Baptist University, previously served on Oklahoma State University’s National Alumni Association Board, and has been an instructor to students planning on entering the banking sector. These accolades, and many others, were why Briggs was recently honored by the Shawnee Chamber of Commerce’s Gordon Richards’ Sr. Service Award.

Looking back on his career, Briggs explained that while he was happy with his accomplishments, he wishes he’d finished those ten hours at Oklahoma State in night school. Even successful bank presidents can have regrets. Yet in an age where every college graduate seems to emerge with a diploma and several thousand dollars of student loan debt, Briggs path offers inspiration, which he credits to the faith shown to him by those along the way.

“I had people who saw that I worked hard, had common sense and that a forty hour work week wasn’t in my vocabulary. If a task took longer, I stayed until the job was done.”

That work ethic has not only benefitted Briggs, but the bank and numerous organizations he continues to serve.