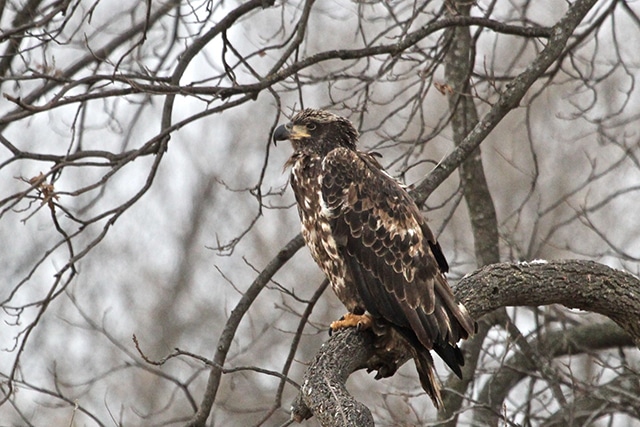 Winter weather persists here in Oklahoma. The bird feeders around the aviary are packed full of every songbird indigenous to the area as well as woodpeckers, flickers and crows. Even the turkeys are depending on us to furnish a daily meal in the harsh winter weather.

However, Wadase has only been to the aviary a handful times in the last several weeks. Her telemetry shows us that she has been spending time just northeast of the Iron Horse Industrial Park project along one of her favorite bends in the river that offers her protection from the harsh North winds. That portion of the river opens up to a wide section of water. There, situated between the tree-lined northern bank of the river, where the water is deeper and the sand covered southern bank where the shallows are, Wadase has found an ideal place to fish. 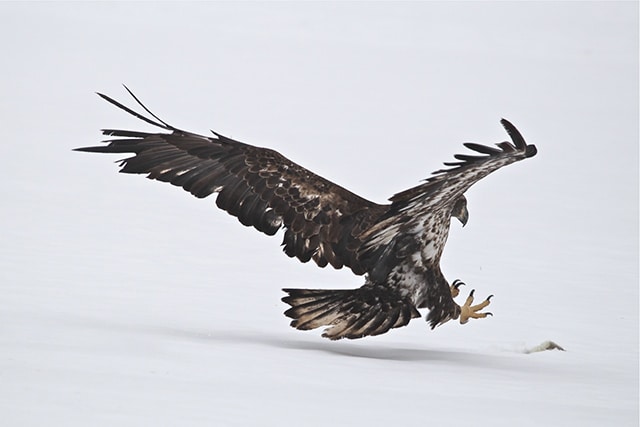 We had hoped to capture video of her fishing along that portion of river and have spent many hours over the course of several days in a blind. Despite this, we have not yet seen her attempt to catch a fish. We know the statistics of bald eagle activity and we knew there was only a narrow margin to catch her on film. Bald eagles statistically spend 91 percent of their time at rest, perched or roosting. 2.6 percent of their time is spent drinking or bathing while only 4.1 percent is used for hunting and scavenging for food.

As we packed up after a long and uneventful day in the cold we spotted her around the bend. She flew along the river towards us and disappeared in the northern tree line into an area that she has been known to use as a roost.  The whole encounter was over before we could unpack camera or video equipment. It was good to see her though. The last time she was at the aviary, she roosted atop the large enclosure. Occasionally she flew from one crossbeam to the next as if she was trying to get a reaction from the eagles below. 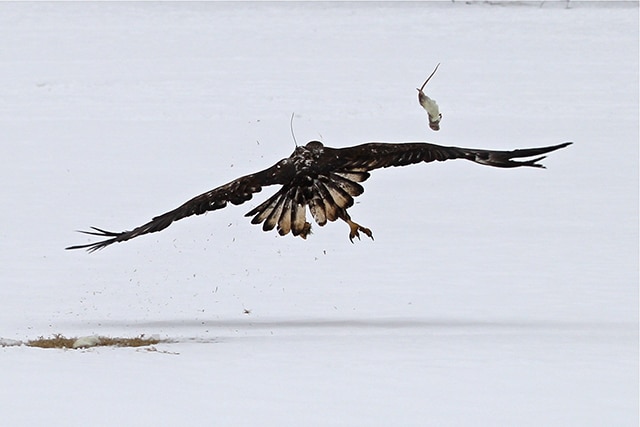 However, they were unfazed by her antics. After several hours she made repeated passes at the food we had offered her. She would fly by grabbing at the rat and launching it into the air and circle the pasture and return to the top of the large enclosure and repeat the process. On the fourth pass she nabbed the prey and headed out across the pasture north towards the river and out of sight. This was the first time we saw her take food and leave the safety of her pasture. Young eagles spend the majority of their first four years out of the nest exploring territory and gaining necessary life skills to be successful in finding a mate and rearing young of their own. She continues to surpass our expectations as we continue to learn from her and gather valuable data from the telemetry.

The CPN is fortunate to have been able to send one of our prayer warriors back into the wild so early in our program’s development. Wadase Zhabwe is out there everyday carrying all of our prayers to the Creator, Momagosnon.