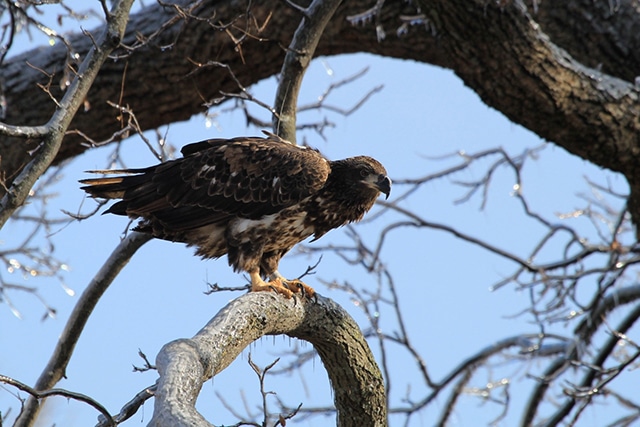 Wadase Zhabwe continues to explore new territory on the North Canadian River. Since her release in April 2013 she has never ventured north of I-40, but on New Year’s Eve she did just that and rang in 2014 in a new place.

New Years Eve’s telemetry put her in the Dale Bottom near the Grand Casino Hotel and Resort. The following week she visited several places along the North Canadian River between Dale and McLoud, ventured almost to Harrah, stopped at Wes Watkins Reservoir before venturing further northeast to Prauge Lake. Little more than a week into 2014 she had crossed over I-40 almost a dozen times and had seen both sides of the county line from the East to the West.

We were relieved to see the telemetry data showing that when she does cross I-40 she is doing so at about 1,000 feet. She continues to frequent the aviary but when the weather is nice she is spending more and more time hunting along the river. She has made several visits to the aviary since the first of the year to simply visit. She spent an afternoon sitting atop the aviary’s metal feathers just content to be with the eagles she knows here and while we offered her lunch it appears she’s doing well enough on her own that she passed on the offer. She is sustaining herself as her hunting skills improve and that is a great thing for us to see. She continues to make good decisions about the areas she frequents as most are mostly along the river in areas without a great deal of human intrusion. 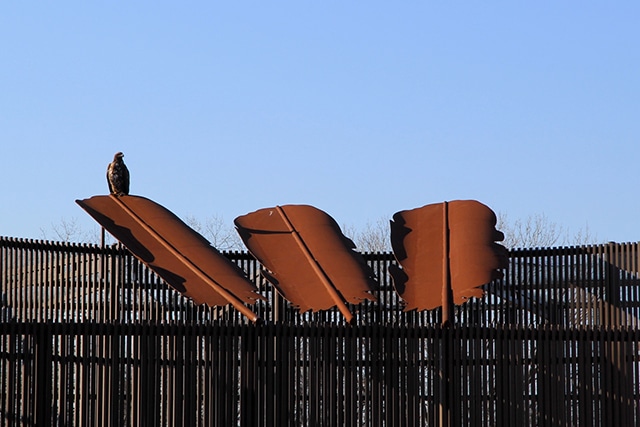 Several times she has returned to the aviary and other eagles have not been far behind. We suspect many of her ventures away from the aviary may have been with other eagles as well. The New Year brought another first experience for us all.

During a recent visit, Wadase landed out in the open pasture after the local Red-Tailed Hawk had flushed her from her perch. As she was sitting on the ground, preening her feathers, the dozen turkeys that live around the aviary noticed her. They immediately dashed towards her and encircled her. The toms in the group proceeded to spur and flog at her. She was caught off guard at first and she was unsure of what was going on and when she realized this was not a friendly encounter she postured up with hackles raised and decided that turkey might be on the menu after all.  We have seen this interaction several times now and she is well prepared for the turkeys after a few of these interaction and goes on the defensive well before the turkeys can surround her. 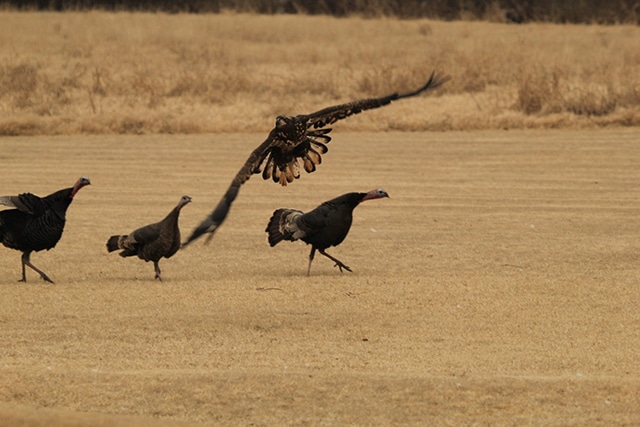 We have not yet found anyone that works with eagles that has documented an interaction such as this one. The confrontations are brief but are scary knowing a well-placed spur could injure an eye or her wing. Although, it may be a rare occurrence here because it is a shared space for both species, it is quite the exchange. She has started to take flight when they come running and her favorite maneuver is to fly off as if she is leaving and circle back around and dive towards the turkeys, sending them running every direction off into the pasture. She lands in a high perch looking very pleased with herself as the turkeys scramble back together and leave the pasture to her. While there are many challenges that face young eagles in the wild, she continues to thrive. By leaving the “nest” here at the aviary, she has made it through the most difficult time in her young life. The New Year has already brought new experiences for Wadase and we look forward to the coming months as we wait for spring migration to see where she will make her summer home. We will continue to monitor her progress. For more information or to read previous updates please visit https://www.potawatomi.org/about-wadase