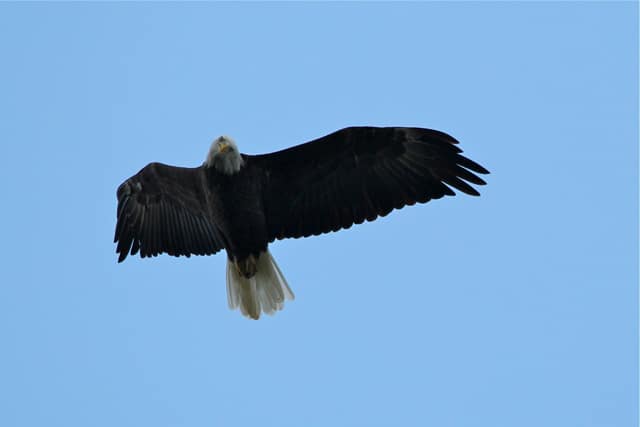 The bald eagle is a migratory species. Those birds that nest in the Great Lakes states and adjacent areas in Canada fly south to find food for the winter, and many find their way to Oklahoma. Eagles begin arriving here in late November and December. Their numbers peak in January and February, and most birds have left for their northern breeding grounds by the end of March.

Okla. is an important wintering area for bald eagles, consistently ranking among the top 10 states for numbers of birds. Each winter thousands of eagles migrate south from their nesting range and take up residence wherever they encounter open water and plentiful food. Because of an abundance of lakes and rivers and milder winter temperatures, Okla. is especially attractive to these magnificent birds. During severe winters in the north, 800 to 1,500 eagles may gather here in the state. This winter season has been extremely harsh and we are seeing large numbers of eagles here at the aviary as well. 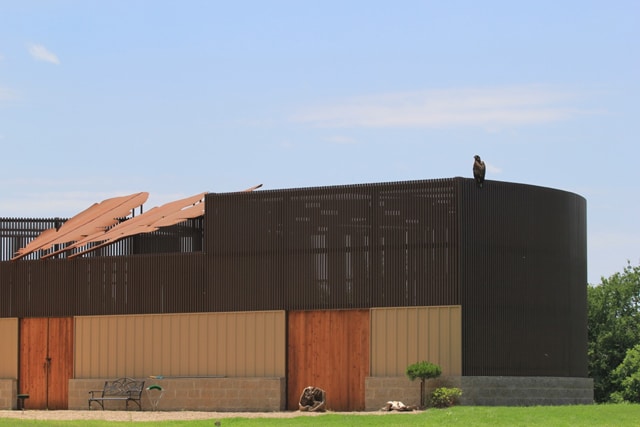 We have been able to count at least eight that frequent the aviary and the river to the north. Some come in for close views of the eagles and roost in the nearby trees. In contrast to their territorial behavior during the breeding season, bald eagles become quite sociable in winter. They roost communally at night in trees near a reliable food source, with the same trees traditionally used each year. Up to 200 birds have been known to use a single night roost in Oklahoma. Wintering birds often use different sites for feeding and nighttime roosts. A bird occasionally may travel up to 50 miles one way between its feeding area and its night roost, but most feeding areas are located near the roost. Bald eagles tend to feed early in the morning and may not feed every day. All of Oklahoma’s major rivers and reservoirs support wintering eagles. They tend to concentrate below reservoir dams, especially where fish that have passed through hydropower turbines are injured or dying. The following areas have good spots for viewing eagles in the winter, and all have public-accessible lands. Check with local officials at these sites to be sure what areas are open to the public.