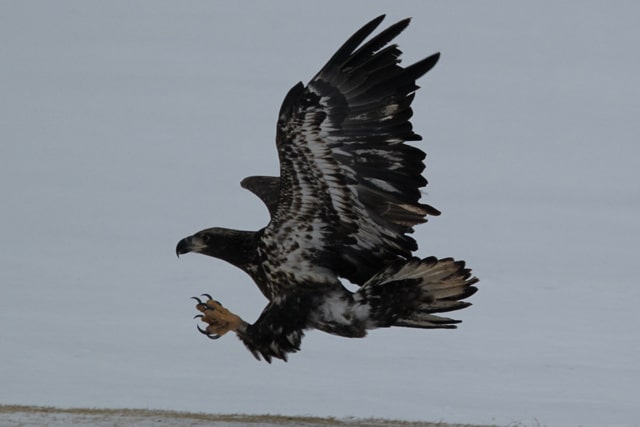 Wadase seemed to find a rhythm within the fall. Spending a few days at the Aviary and then a few days following the river, she was frequenting the areas she had previously explored and did not deviate far from that routine. Until, for reasons we cannot know, after the first week in November she did not show up as routine said she would.

A few extra days passed without her presence and thankfully we were able to download her GPS data. We did not see any current points until the map was expanded from her usual territory and to our surprise she had taken the longest single flight recorded in her life.  She had made her way just south of Maud, Oklahoma where she stopped in the flat reservoir areas. We went out to survey the area to see where she would be finding food and to see if we might spot her. There are few roads into the area directly where her GPS points were located but we were able to see marsh areas filled with water and an abundance of coots which are often meals for bald eagles. We were unable to spot her but did see a pair of adults hunting in the same vicinity she had been. 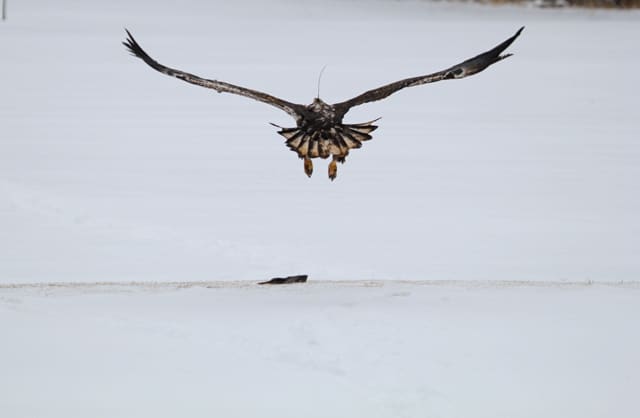 After satisfying our curiosity about the area we returned to the aviary. The following morning when we checked telemetry we learned that she had headed for home just a few hours after we arrived in Maud. She was cruising 31 kph (19 mph) at 860 meters, she had beaten us home. Just before lunch she appeared out front in her usual spot.  We were glad to see her back and figured she would be hungry before the cold snap, but to our surprise she did not eat. While it might sound strange, we were very glad. After being gone for an extended amount of time, her not being hungry when she returned tells us that she is hunting very well on her own.

She ventured outside Pottawatomie County just before Thanksgiving and spent almost two weeks on the South Canadian River before returning home Thanksgiving Day. That was the first time that we have actually spotted her flying so high that we couldn’t be sure it was her. The eagles in the enclosures began to call and she started to spiral down closer over the enclosures, calling back to the eagles inside.  Telemetry had told us she was doing those things but being able to see her out there as she was intended to be was incredible. 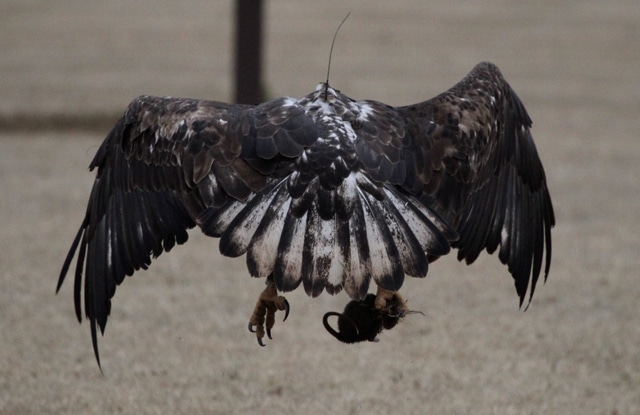 With the threat of severe weather moving in to the state it was a relief to see her as well. She spent the majority of her time the next two weeks during the ice and snow close to the aviary.  Most days she would come in to eat by 10:00 am and be gone by 3:00pm. A few of those days she arrived with a fairly full crop but still took advantage of a warm meal on her platform. After the snow melted she fell back into the rhythm that she had in fall and as we approach the first official day of winter she has now experienced every season on her own. She has endured the spring, summer, fall and winter weather and seems to be thriving. Through all of her explorations, she has returned to the aviary and it seems that the odds are mounting in favor of this area becoming her permanent territory.  Although, we know spring still holds the possibility for her to leave with fledgling young eagles of the year but we are hopeful she continues to frequent this space. We will continue to monitor her progress. For more information or to read previous updates please visit https://www.potawatomi.org/about-wadase.