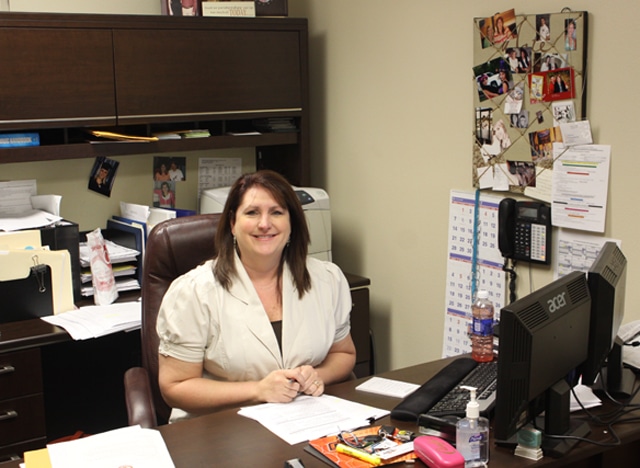 With a pharmacy, dental clinic, Behavioral Health, and medical lab, the East health clinic of the Citizen Potawatomi Nation is more than a simple doctor’s office and waiting room. Conducting around 1,700 medical appointments each month, the healthcare staff works full time in serving members of Native American tribes.  Heading up the staff of the East Clinic in its day-to-day tasks is Clinic Manager, Starla Griffith.

Griffith was raised in Bethel Acres, Okla. a small community just outside the tribal headquarters in Shawnee, and still lives there to this day. She got her start in the healthcare field at Southwest Medical Center in Oklahoma City, where she began as a nurse following the completion of a nursing degree at East Central University in Ada, Okla.

During her time at Southwest, Griffith became interested in learning the administrative side of healthcare in addition to her normal nursing duties. She was involved in the medical center’s establishment of its first angioplasty recovery unit.

Her growing experience in the Emergency Room and Intensive Care Unit at South West Medical Center led her to her next professional opportunity. After five years of work at Southwest Medical Center, Griffith took the position as the ER Director at Mission Hill Memorial Hospital, as it was then known.

Having established a record of setting higher standards of professional appearance and nursing practice at Mission Hill Memorial Hospital, Griffith applied for the latter’s Director of Nursing position. The added responsibilities of the new position were both challenging and rewarding for a nurse only a few years out of college.

“I was 27 when I first applied, and they told me that I was too young to take over the position where I would be in charge of nurses older than I was at the time,” said Griffith. “In my interview with the CEO of the hospital, I told him that if he gave me three months and wasn’t satisfied, I would return to my previous position. However, I never went back.”

The position’s responsibilities included overseeing the hospital’s pharmacy, attending Medical Staff meetings, Insuring hospital compliance with regulatory and accreditation standards, and presenting reports to the board of directors on a monthly basis.

“I felt that after 21 years of being on 24-hour-a-day-call, and participating in multiple accreditation and quality surveys, I might have a chance at living longer if I explored other career opportunities.” Griffith said laughing. “I had worked with Dr. Spurlock at Unity Health Center while he was working concurrently with CPN as the Director of Health Services and Medical Director, he always had positive things to say about CPN so when the opportunity with the tribe came up, I felt that it would be a good fit.”

Now as the tribe’s East Clinic Manager, Griffith puts her experience as a nurse administrator to use. Speaking about her time at CPN, she is positive about the differences she notices in comparison to her previous two posts at Southwest Medical Center and Unity Health Center.

“Patients here are very appreciative of our services, but they’re also great about giving feedback, be it positive or opportunities for improvement. They want to know all about you, where you’re from, and it is just a completely different atmosphere than inpatient health care.”

Along with Director of Health Services Tim Tall Chief, Griffith has helped enhance the tribe’s health services for tribal members of all Native American tribes, focusing efforts on improving patient flow and eliminating as many hurdles possible for our patients.

“Starla came to us with some highly developed organizational skills she has many years in this health field and we feel very lucky to have her at CPN,” said Tall Chief.

With more than 6,000 active charts and 1,700 medical visits each month, the load carried by the clinic’s staff remains impressive.

“The main difference between the CPN clinics and some other Indian Health Clinics is that we are structured like a traditional private practice physician office, working on appointment basis only,” said Griffith. “Some Indian clinics work on a first come, first serve basis, causing patients to spend a great deal of time waiting and hoping they will be seen that day. Patients at the CPN clinics are assigned a personal provider, who if possible, they see on each visit. Each provider also has six open slots each day for same day appointments.”

“Our focus on improving our healthcare services has been a patient centered approach, reducing wait times for provider visits as well as outpatient Lab, Imaging, and Pharmacy services. The best example of this is our Coumadin Clinic which was opened in February of 2012.  We recognized that our patients were having multiple stops and extended wait times when they were having their blood levels checked for their medication.  We took the necessary steps to eliminate the multiple hoops to jump through, streamlined our processes and created a one stop plan for the patients which resulted in improvement in their overall experience as well as the necessary one-on-one attention often needed to insure the best medical outcome in their care.”

The clinics are the primary source of medical care for many Potawatomi, with around 50 percent of the patients seen being CPN members. At the dental clinic, it is about 70 percent. The pharmacy fills between 600-900 orders each day, and the lab runs processes around 500 tests a month, and Contract Health processes an average of 600 referrals per month.

“As staff, we won’t put the patients through anything that we wouldn’t want to if we were in their position,” she said. “Our goal is to have our patients see CPN’s clinics as their ‘medical home’. The first place they go if they’re in need if it isn’t an emergency situation. Judging by our growing numbers, I think we are well on our way.”