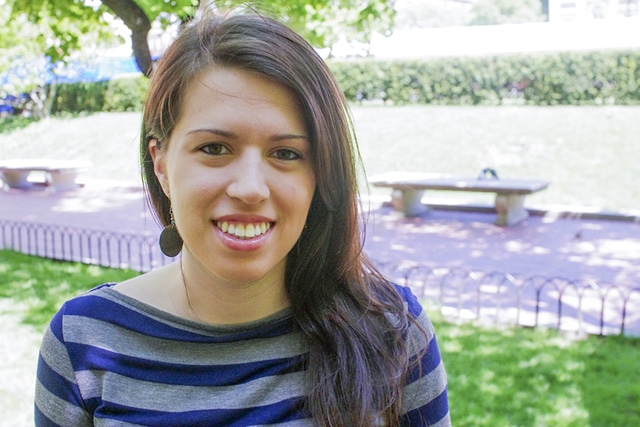 Exploring the history and identity of Native American culture has become increasingly prominent since the 1975 passage of the Indian Self-Determination and Education Assistance Act. As Native people were given expanded rights to determine their own path, academic studies focusing on the identity and its effects of present day policies have come to the fore. Citizen Potawatomi Nation member Lakota Pochedley studies such topics in hopes of one day helping shape Native American education for the better.

Pochedley, a descendent of the Slavin family, decided to also focus on Native American studies during her time at Columbia University. She had initially gone to Columbia to pursue an anthropology degree due to the university’s prestigious reputation for having one of the country’s leading programs for anthropologists. Yet, an opportunity to study under well-known academic Audra Simpson prompted a change to pursue a degree in both Anthropology and Native American studies.

“She was the first Native female role model that I had ever seen in academia, and honestly it was inspiring,” said Pochedley. “Her lectures became the basis of my thesis. It laid the foundation for everything else I would eventually pursue.”

With Simpson’s assistance, Pochedley applied for and received the Class of 1939 Research Fellowship that allowed her to research about Potawatomi history in Oklahoma, Kansas and Michigan. Her honors thesis specifically focused on the Citizen Potawatomi Nation. Pochedley wrote on contemporary identity politics and how Potawatomi identities have been constructed by removals and other U .S. settler colonial policies.

That research, combined with her studies, led her to the University of Texas’ graduate program where she will study Cultural Studies in Education. Her focus is in the promotion of culturally relative opportunities for educating Native American youth. One specific aspect of her research is the eventual establishment of curriculum using tribal languages and cultural practices in education as a means of supporting tribal sovereignty.

Her interest in education, specifically for Native Americans, also influenced her decision to apply as a student board member for the National Indian Education Association (NIEA). The organization’s goal is to advance comprehensive education opportunities for Native Americans, Alaskans and Hawaiians by coordinating learning opportunity for indigenous students.

“The NIEA is one of the few organizations that produces positive, qualitative research rather than perpetuating work that compares Native students to other minorities and white students and talks about how they’re constantly failing,” explained Pochedley.

NIEA’s work also advocates and provides a forum for educators of Native youth to come together to find solutions for this underserved student population. One aspect of this is to focus on enhancing education for Native American students through the promotion of tribal language and cultural norms as a means of supporting tribal sovereignty.

“I think all tribal nations need to adopt this mentality when discussing education and opportunities for tribal youth,” said Pochedley. “A lot of times, sovereignty is only relegated to the realms of land, governance, and economics or finances. Why is educational sovereignty ignored or rarely discussed?”

Elaborating on this, Pochedley explained that once her studies are complete, which eventually will include a PhD, she is interested in establishing a Potawatomi immersion school for tribal youth.

“Language is such a huge aspect of identity building. It is also thoroughly denied to Native students by sitting them in American-Eurocentric classrooms. You understand yourself differently in different languages because the languages themselves have differences in the way they understand and portray the world.”

“Simply put, we’re called the Potawatomi because that’s what the French called us. But growing up my family always explained that we were Neshnabe (“True people”) or Bodewadmi (“People of the Fire”). It’s a completely different way to construct your identity or understandings of your identity.”

Her passion for Potawatomi immersion-based education opportunities stems from her own experiences as a French student. Pochedley says that despite taking classes for six years as a high school and college student, she never spoke the language until her time in the French-speaking African nation of Senegal.

“Immersion is a whole other level of learning, and since we do not have many first-language or fluent speakers, it would begin to fill this void. Also, it is so much easier to learn languages at a young age, and doing so can be an identity affirming experience.”

Pochedley has not only studied the issue of Native American education, but also served the tribe’s language learning services over the course of the past two summers. An alumna of the Potawatomi Leadership Program, she worked closely with the staff of the Cultural Heritage Center and Language Departments. In 2012, she continued on as an intern with the Language Department and Cultural Preservation Department and this past summer worked directly with the FireLodge Tribal Youth Program.

As she enters her graduate program at the University of Texas, Pochedley reflects the next generation of tribal members who have grown up in a time where the knowledge of their past was more accepted and open to study.

“I was taught to be proud because elders and ancestors within my family grew up in a time where it was hard to be proud, where they were made fun of and faced constant systematic and overt racism. Yet they still managed to pass on their pride and knowledge to me,” she explained. “My ideas of what it means to be a neshnabekwe have grown during college, particularly because it was a different kind of space where I could grow and understand different aspects of my indigenous identity and also what it meant to lead within an indigenous community. However being proud and respectful never changed throughout my life. The struggles and stories of my ancestors and elders have always grounded me and help me understand where I come from.”