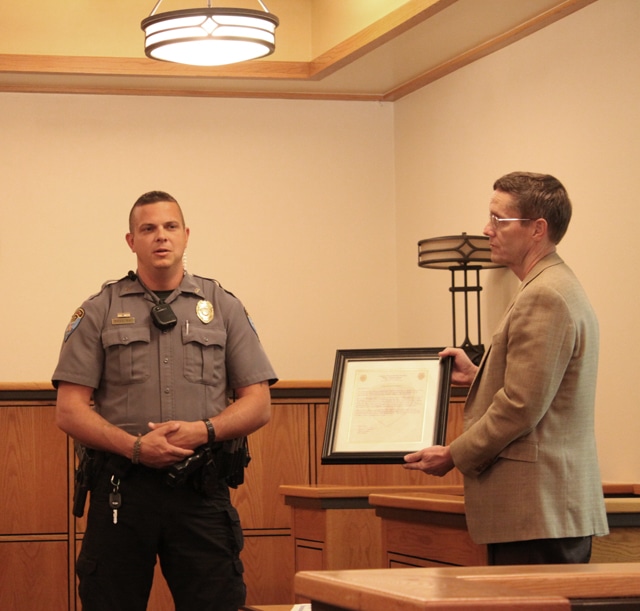 Chief of Police Jim Collard presented awards for meritorious service to two members of the Citizen Potawatomi Police Department before assembled guests at the tribal court in Shawnee, Okla.

Citizen Potawatomi Nation Officers Russell Ross and Chris Berry were recognized for their professionalism and dedication in the field of law enforcement. Ross was awarded a letter of commendation by Chief Jim Collard for his apprehension of two suspects in a stolen vehicle, while Berry was promoted to Sergeant.

“These officers work reflects the highest level of law enforcement professionalism and the dedication that brings honor to themselves and the CPNPD. We have a great police department and are proud to serve the Citizen Potawatomi Nation.”

Ross, a former Marine and officer for the city of Prague, has been with the CPNPD since February 2013.

“We get into challenging situations in our work, but it does make dealing with them easier knowing you have everyone behind you,” said Ross.  “I want to thank all of you out here for making it easier on me to be successful in my job.” 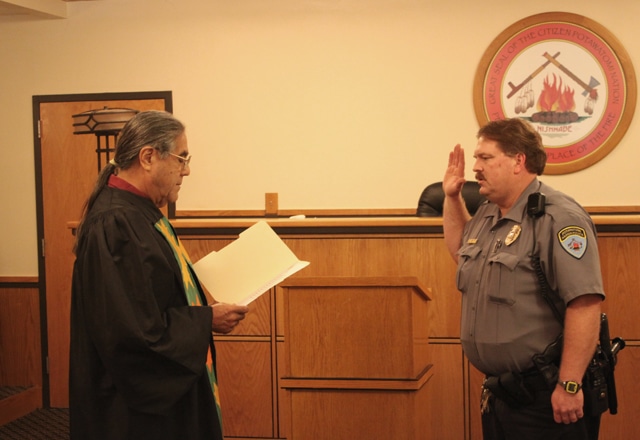 Officer Chris Berry was promoted to Sergeant, a position that will also see him take up the tribal police’s night shift. He is the former Chief of the Wetumka Police Department and has been with CPNPD since January 2013.
“Rank is earned, not given,” added Collard as he presented Berry’s promotion. “I am pleased to promote Chris to sergeant, and say that knowing he will be a good, steady hand needed on the night shift.”

“I’ve been in law enforcement for 22 years, and for as long as I have been with CPN’s police department; it has always felt like a family,” said Berry. “Not to take away from any other shifts, but I believe citizens expect and need protection while they sleep. The night shift is not something I take lightly, and I look forward to continuing to serve.”