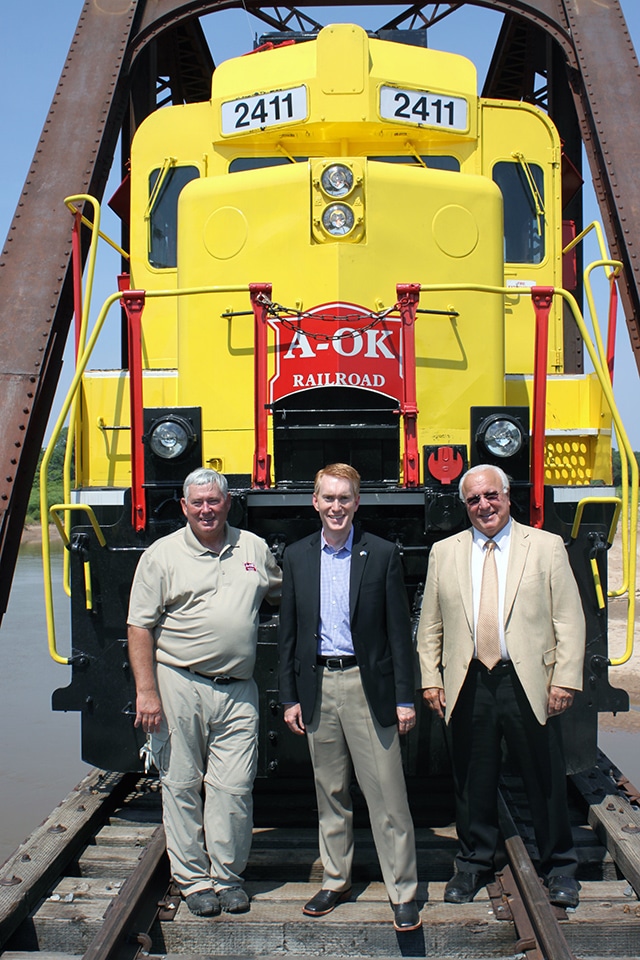 “We owe a debt of gratitude to several people for their help with this project,” said David Donoley, AOK Railroad. “It’s all about partnerships. A lot of people made this bridge possible and it belongs to a lot of people, but this industrial park is what it’s all about. It will mean economic development and jobs for this area.”

After several years of planning and research, Iron Horse Industrial Park is getting closer to becoming a reality. The engineering is complete for phase one of construction and Arkansas-Oklahoma Railroad has completed restoration of Railroad Bridge crossing the North Canadian River.

“The vision for the Iron Horse Industrial Park is to provide a prime industrial location for both tribally-owned businesses and private companies,” said Citizen Potawatomi Nation Chairman John Barrett. “This will further diversify the tribal economy by providing assembly and manufacturing jobs. We are pleased to celebrate this important milestone with A-OK Railroad and look forward to the next phase of this project.”

The industrial park has been in consideration for several years and first saw significant progress when a 2008 independent feasibility study indicated the park was worth pursuing. The feasibility study was followed by a detailed econometric analysis by Professor Joseph Kalt of Harvard University, which revealed an industrial park would have a significant economic impact on the region.

“This industrial park will create more jobs for the community of Shawnee and other communities along the rail line,” said Dr. Jim Collard, director of planning and economic development, Citizen Potawatomi Nation. “It will also provide additional revenue for the tribe, economic development for the area and further diversify our business portfolio.”

“It’s a real privilege to see this progress,” said United States Congressman James Lankford. “This bridge means jobs here and all the way down this line. For the people involved in this, we owe a debt of gratitude from the State of Oklahoma. This bridge was dependent on Iron Horse and Iron Horse was dependent on this bridge. That relationship means a lot to many Oklahomans and this a great example of how tribes and the private sector can work together.”

The development of the industrial park is critical to the re-opening of the line, which can provide an east-west connection of four major north-south rail corridors to significantly enhance regional commerce.

The Citizen Potawatomi Nation Iron Horse Industrial park is scheduled to open in 2014.