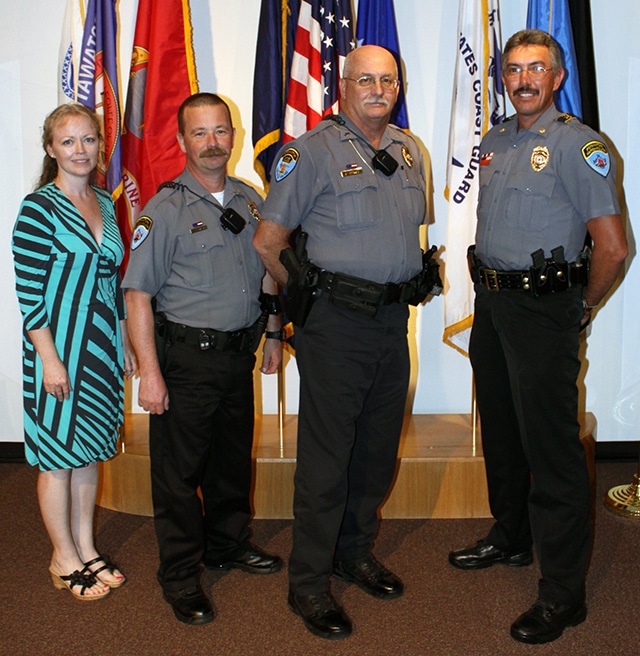 “I knew God was in control and that I had the support of many law enforcement officers on the ground taking care of Dennis,” said Bridgett Dickens, wife of Trooper Dennis Dickens. “That day you guys changed my life. I am so thankful that you didn’t stop or hesitate and that you saved my husband. Any officer would say that they were just doing their job and you did that well. Thank you.”

Major Opela demonstrated the highest level of law enforcement professionalism and ran to the aid of Trooper Dickens after his OHP plane crashed while in pursuit of a suspect in Pottawatomie County.

“Major Opela is extremely dedicated to protecting and serving Citizen Potawatomi Nation and Pottawatomie County and his actions on July 26 show that more than ever,” said Citizen Potawatomi Nation Police Chief Jim Collard. “He risked his own safety to aid Trooper Dickens as the plane began to catch fire. He was able to help pull the pilot from the plane and begin to provide first aid. Words are trivial at times like this, so the best we can say is thank you for your service.”

Major Opela, with the help of Deputy Jason Hollasek and David Carpenter, pulled Trooper Dickens from the plane and began to assess his injuries and provide first aid while help was on the way.

“Major Jody Opela is one of our heroes and will certainly be remembered and celebrated for as long as we are here,” said Citizen Potawatomi Nation Chairman John Barrett. “Officer Opela has exhibited great courage and we thank him for his service.”

Officer Virgil Bonham and Officer David Childs with the Citizen Potawatomi Nation Police Department also received the Award of Commendation for their help assisting officers on the scene.

“We did what we had to do and what anyone else would have done,” said Major Opela. “We all play as a team. It doesn’t matter who you work for in this county, we all pull together and get the job done.”

Major Opela has been with the Citizen Potawatomi Nation Police Department for 10 years. Opela is one of more than 20 officers that patrol the 900 square mile tribal jurisdiction, with a focus on tribal property and land. The CPN police department is one of only four police departments serving all of Pottawatomie County. This is the first time the Medal of Valor and Lifesaving award have been given in Citizen Police Department history.

“Really, the instinct kicks in and you just focus on getting him out of harm’s way,” added Opela. “The training kicked in once we were away from the plane and then we started to assess his injuries and provide first aid.”