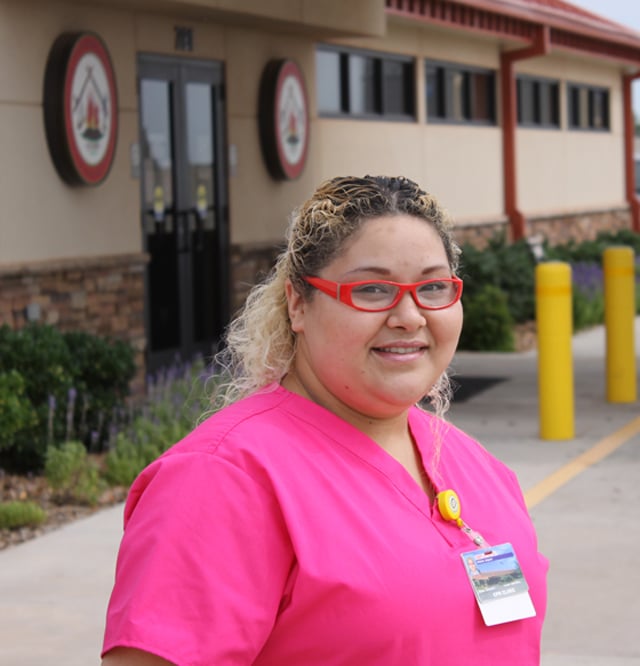 Arlene Jaquez, a nurse at the CPN West Clinic, was in a similar situation that many Oklahoma City-area residents found themselves in on May 31 when tornado producing storms hit. Jaquez, caught in rush hour traffic swollen with citizens trying to escape the approaching storms, found herself and her family away from their home south Oklahoma City.

“My father was driving and people everywhere were panicking, trying to get to shelter,” recalled Jaquez. “When I felt the truck move from the winds, I told him to pull over and we sought shelter along with 15 other people outside of a business. It was locked, but we finally got inside and rode out the storm.”

When the tornado sirens finally stopped, a torrential rain continued to soak large parts of the metro area. Jaquez and her family tried again wait out the weather, this time closer to home in a Wal-Mart parking lot, but eventually decided to try and walk to home. Driving was impossible, with streets full of cars and flooded with rain.

“We finally got to my street, and just looking at it when it’s dry, you wouldn’t think it could hold that much water. But it was completely flooded. My 2010 Honda Civic had water up to the roof, and it was a foot deep inside my house,” said Jaquez. 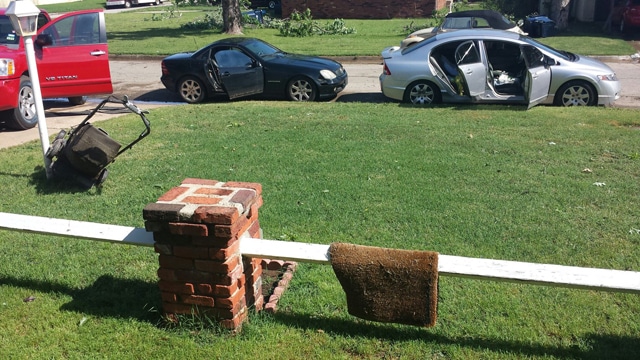 “I was frustrated at first because they ignored us, or couldn’t see us and drove right into the water,” she explained. “But then I saw a little kid in the back seat, so I went into the water and checked on them. The little boy in the backseat, he was panicking, and I told the two adults in the front seat they needed to get out of the car.”

The driver said he couldn’t, explaining that he was having chest pains, which was why he was trying to go down the flooded street. Jaquez took the boy out of the car to higher ground, and with the help of her father and neighbors, got the two adults out.

“I told my Dad to get some aspirin for the man having chest pains. Then I began checking his vitals.”
All turned out to be ok, and later in the evening as Jaquez stood outside her flooded home talking about the incident with her next door neighbor, she heard what she described as “birds squeaking.”

After listening to the sound a little longer, Jaquez and her neighbor found a litter of kittens had been washed up next to a house by the floodwaters. One had already drowned, but they pulled the rest from the rising water and put them in the box.

“The mother cat, who we thought was just a crazy stray earlier in the night, came once we put the kittens in the box and began nursing them,” said Jaquez. “I’m not a cat person, but those kittens had my heart after that.”
Unfortunately for Jaquez, along with the loss of her car, she also found out that her homeowners insurance didn’t cover floods.

“I’m basically under insured because my current policy won’t cover all the damage. I don’t know how I missed it, because I read my policy each year when I renew it, but I didn’t have flood insurance. I’m covered for volcano eruptions of all things. It’s devastating,” she said.

Jaquez is currently negotiating with her insurance company to find out how much they will cover and what costs she will have to pay for on her own. Despite the incredible losses she’s incurred, Jaquez showed up for work the next week with a positivity her colleagues at the CPN West Clinic praised.

In an email to staff, CPN West Clinic Business Office Supervisor Keri Harjo wrote, “In the face of all this adversity, she had the wherewithal to save a 6 year old child from a car that was sinking in the flood waters and assisted two elders, one with chest pain until the paramedics were able to make it into the neighborhood. Even though she left her cape at home today she is here with a smile.”

Said Jaquez, “I was just overwhelmed with my whole experience, I let myself cry for 10 minutes and my tears mixed with the rain…I believe everything happens for a reason…I’ll find God’s grace in it.”