This months’ article features Kaitlyn Orr, no relation to Yancey Orr from the previous article. Kaitlyn is a member of the Bourassa family and is currently living in Boston, Mass. She grew up in Shawnee, Kan. and moved to Boston where she is now working on her MBA at Harvard Business School.

After the incident at the Boston Marathon on April 15, I checked to see if any of our tribal members lived there, or perhaps were participants in the run.  To my surprise, there was only one person living in the city at the time.

Where Kaitlyn lives is but three miles from the bombing.  Asking if she was there, I was relieved to find out that she was safely tucked away in a classroom. But it didn’t take long for word to spread of the tragedy and as a result, in Kaitlyn’s words “definitely unsettling, a feeling of insecurity.”

The following days were not much easier either. During the hunt for the bombers, Kaitlyn, like most of the people in the area, stayed indoors glued to the television. When photos of the Tsarnaev brothers finally appeared on the television, she said that her and many of her friends were “spooked.” Knowing who the police were looking for and how dangerous the brothers were, Kaitlyn added that she …”couldn’t go out and have a normal life…”

But the real fear came when police started closing in on the suspects.  Kaitlyn lived only two miles from Watertown and much of her shopping was done in that area. She was in the area just after the car-jacking took place.  She said that the scene was chaotic and tense with about thirty police officers in the area.

On Friday morning, Kaitlyn was still glued to the television. Asking her how the media reported second by second accounts of the situation, Kaitlyn responded that there were “too many rumors and false information on TV.”

As for me, I completely understood, having lived in Oklahoma City during the Murrah Building bombing, hyperbole takes control.

Even though Watertown was under a tight lockdown, Kaitlyn’s area was placed in the same condition, she said “no one was walking around and there was a lot of security in the area.” She went on to state that everyone was unsettled even in talking about it until the bombers were caught.

After the standoff ended Kaitlyn expressed a sense of relief. People were back out on the streets, except this time with a “strong sense of solidarity” as Kaitlyn put it.

The following pictures show the downtown area where a bombing memorial was set up.  I would like to thank Kaitlyn for sharing her story with us and the pictures she contributed to this article. 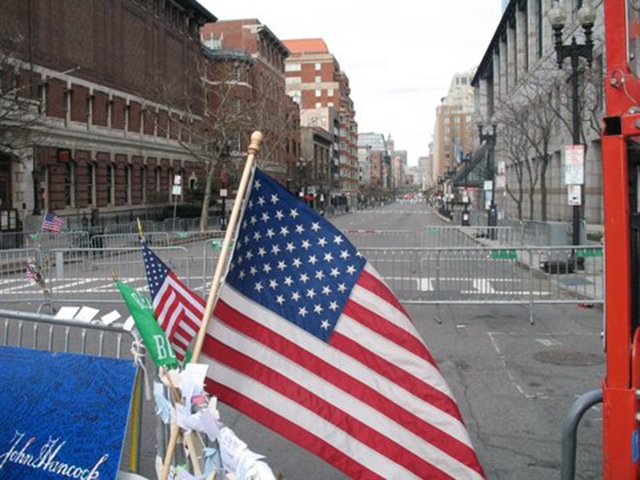