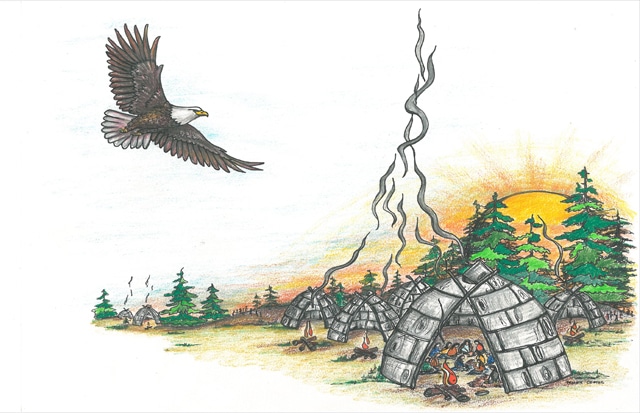 Long ago the Creator, Mamogosnan (our great father), became angry with mankind because they did not live in the right way.

When they prayed, they did not use the proper medicine, tobacco (sema), and they fought amongst themselves constantly. Some even disrespected their elders, speaking down to them and making them do hard work while the younger people played.

Angered and disappointed by their actions, Mamogosnan decided after one particularly gruesome day that he would destroy mankind once and for all.

Eagle, who had taken a liking to mankind even with their faults, begged Mamogosnan to let him find some people who were living in the correct way. The Creator, thinking back to the days when he created man and had such hope for their future, agreed to wait before destroying them.

The next day, Eagle flew East in search of people who lived in the way Mamogosnan had instructed. Searching high and low, he found people, but none who the Creator wouldn’t be disappointed in.

The second day, Eagle flew into the South, hoping to find people who would show the Creator that his instructions on how to live were heeded. Yet he found no hope there, only bands of people fighting over land, water and other things.

Still optimistic, Eagle took off on the third day towards the West in pursuit of the sun. But to his discouragement, he witnessed men yelling at their fathers while grandfathers and grandmothers toiled at tasks that should have been done by their grandchildren.

When he returned that evening, Mamogosnan told him that while he admired Eagle’s faith in man, tomorrow would be the last day for them on the Earth he had created for them.

“Mamogosnan, give me one more day,” said Eagle. “I’ve searched three directions, but a fourth remains. What is one day to you?”

The Creator thought about this. Touched by Eagle’s determination, he agreed to wait.

Early the next morning, Eagle set off North. Just as the sun began to rise in the East, he noticed a line of smoke rising like a small grey string in the distance. As he got closer, he saw that it was not just one fire, but many. Villages had people going back and forth along well tread paths, trading and buying goods from one another.

Flying by one big lodge, Eagle looked inside. The tribal members there were praying to Mamogosnan with sema.

Returning to Mamogosnan, he told of the people in the North who lived peacefully with one another and the Earth. He described the prayer smoke he’d seen from those offering sema in their prayers.

“There are those that live in the way you instructed,” Eagle told Mamogosnan. “If you destroy them along with all men, how will the others learn to live in the right way?”

The Creator thought about this a long time, and ultimately decided to spare all of mankind.

To this day, the eagle is sacred to the Potawatomi people. He is respected and honored as a messenger between man and the Creator because he flies highest into the sky and carries the smoke from their prayers to Mamogosnan.