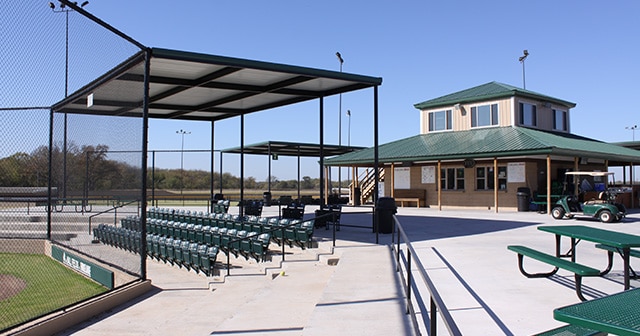 The Ball Fields at FireLake opened in March 2012 and have exceeded expectations of teams, guests and even management.

FireLake hosted more than 20 events during the 2012 baseball and softball season. Those events ranged from t-ball tournaments to high school tournaments. For 2013, they already have more than 30 events scheduled, including college events and the USSA World Series. They also plan to host the adult and youth softball tournaments for the Jim Thorpe Games this summer.

“We are constantly striving to get the biggest and best tournaments here at the FireLake Ball Fields,” said Jason O’Connor, FireLake Ball Fields. “These events are tremendous for the community because they draw in hundreds of guests from other cities and states, providing an economic boost for Shawnee.”

The Jim Thorpe games have taken place in Oklahoma City in the past and have had participation from more than 1700 athletes from 70 tribes.

“This event showcases the athletic talents of Native American Athletes,” said Annetta Abbott, executive director, Jim Thorpe Native American Games. “It is important to the success of the Games that we provide first class facilities where these athletes can compete.”

“We provide a great place to play softball and enjoy a clean and safe place to bring the family and watch softball games,” said O’Connor. “The fields have quickly became popular with all of the teams because of how nice our complex and fields are, and all the activities the kids and parents can do on the grounds in between their scheduled games.”

The Ball Fields at FireLake are in walking distance to the Firelake Bowling Center, Subway, San Remo’s Pizzeria, Firelake Grocery and FireLake Casino.

“The local hotels were overwhelmed with all of the teams and guests that needed a place to stay last spring and summer when they played in our tournaments,” said O’Connor. “Not only does the tribe benefit from all of the people that come to watch our softball tournaments, but all the communities around us benefit as well.”

Teams interested in playing at FireLake Ball Fields should contact Jason O’Connor at 405-659-8828 or by email at jason.oconnor@potawatomi.org.