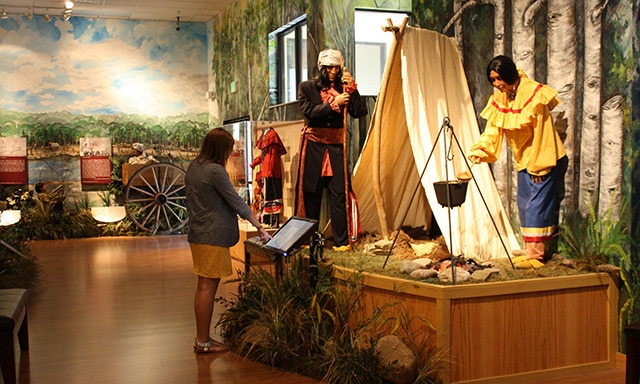 The “Veteran’s Wall of Honor” in the Long Room will be removed so that staff can repair damage caused by a snow storm and an earthquake in 2011. The renovation will include some structural repairs, fresh paint and additional exhibits.

“We’ll be adding some regalia from the pre-contact warrior society and changing the exhibit to follow a chronological timeline from pre-contact to current,” said Kelli Mosteller, director, Citizen Potawatomi Nation Cultural Heritage Center.

“Previously the “Seven Fires” exhibit was in the corner and not accessible; we’ve moved it to allow people 360 degree access and to better represent an important part of our oral history,” said Mosteller.

The Prophecy describes a turbulent time in Potawatomi history when the tribe was visited by seven prophets. The prophecy has helped the Potawatomi people understand who they were in the past, are in the present and will be in the future.

A new exhibit will be added to display and discuss the Potawatomi’s extensive relationship to water, wild rice, canoe making and fishing. Staff is currently working on a canoe and fish baskets made from birch wood.

“There are several museums that have objects and artifacts related to an era of our history in which a marine culture dominated,” said Mosteller. “We’re hoping that this exhibit will allow us the space to receive some of those items on loan.”