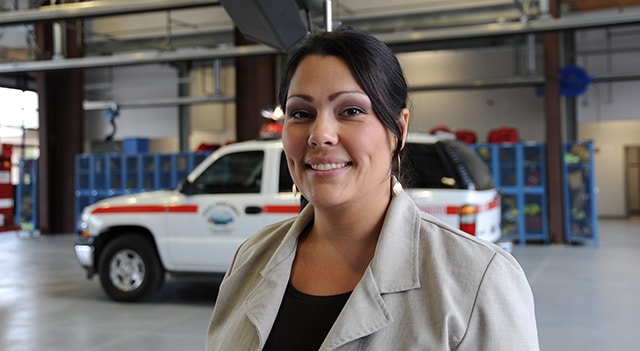 Margaret Muhr is a Citizen Potawatomi tribal member enrolled in the Naval Postgraduate School’s Center for Homeland Defense and Security program. Although Muhr is the first tribal member enrolled in the program to work for a tribe, she is no stranger to emergency management. Muhr has built a Tribal Emergency Management program for the Agua Caliente band of Cahuilla Indians from the ground up.

Muhr began with the Agua Caliente in January 2006 January as an administrative coordinator for the planning & development department. After she completed undergraduate coursework at the University of Phoenix San Bernardino she was promoted to Administrative Manager. In 2008 she took on the responsibility of National Incident Management System compliance for the Agua Caliente and quickly gained an interest in emergency preparedness. In 2011 she enrolled in the Naval Postgraduate School to attend the Center for Homeland Defense and Security.

“Every aspect of emergency management is a challenge for tribes,” said Muhr. “Education, training, and the ability to meet compliance measures are the biggest challenges we face currently.”

“Disasters know no boundaries, a catastrophic event does not care about jurisdictional lines and in moving forward we all need to work as such,” said Muhr. “It is crucial that we are all on par both in knowledge and capability as a nation and that these efforts continue. All jurisdictions have to communicate and coordinate before a disaster.”

Recently, Muhr was responsible for creating a mobile emergency operations center. The EOC has a state of the art dispatch system, so the tribe can communicate with other law enforcement agencies, five computer terminals—complete with the latest GIS, or mapping software, a satellite system that provides internet and phone service regardless of location, and a dedicated area for tribal government officials.

“The EOC can not only function as an incident command post during search and rescue situations, but also as the center of operations during larger, more serious incidents like catastrophic fire or earthquake events that could interrupt business and government functionality.”

“We can’t change the past but we can surely define the future for tribes and emergency management services,” said Muhr. “The success of partnership between the state and local governments and tribes depends on the respect and understanding one has for the other.”