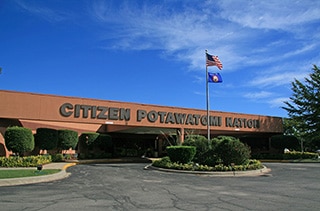 Report finds Oklahoma tribes have 10.8 billion impact to the state

The Citizen Potawatomi Nation has a $506 million economic impact in the State of Oklahoma. This includes $64 million in wages and benefits which directly supports nearly 2,000 jobs and purchases contributing to a $370 million impact on the local economy.

“Our growth and development is good for us, our tribal citizens and the state of Oklahoma,” said John Barrett, Chairman, Citizen Potawatomi Nation. “The services we provide ease the burden on the state, provide jobs in our communities and create economic opportunities.”

“Tribes’ economic activities positively impact the entire state of Oklahoma and serve as a vital source of income and opportunity to residents in the rural areas of the state,” said Kyle Dean, Ph.D, associate director and research economist at the Oklahoma City University Meinders School of Business.

Citizen Potawatomi Nation is among the 38 federally recognized tribes within Oklahoma whose jurisdictions cover three-fourths of the state and whose tribal citizens make up 13 percent of the Oklahoma population.