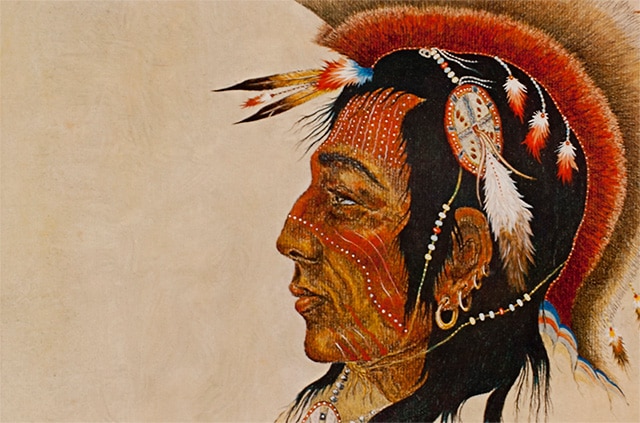 “Half of my life passed in striving to complete the pictorial record of Indian history.” -Woody Crumbo

More than one century ago one of the most iconic and revered American Indian artists was born on a reservation allotment near Lexington, Okla. By the age of seven, that boy would be orphaned and taken in to be raised by a Creek family.

A Citizen Potawatomi Member, Woody Crumbo, would dedicate his life and talent to the portrayal of American Indian thought and culture. Despite the changes in the last 100 years, Crumbo’s work is still an important and beautiful portrayal of Native American culture.

His art is being featured in a special exhibit, “Crumbo Spirit Talk” at the Oklahoma History Center through the end of May 2013.

As a teen, Crumbo attended Chilocco Indian Boarding School, where he became friends with the Kiowa Five. Crumbo also studied at the American Indian Institute and Wichita University. Crumbo was a flautist, dancer, silversmith, muralist and painter.

Crumbo’s career spanned nearly 60 years and included major advancements in oil, silkscreen, tempera, pencil and watercolor. His work is in numerous museums and private collections around the world, including that of the Queen of England.

It was Crumbo’s mission to share his art with the world and bring Native American art to a wide audience.

“Crumbo wanted his art in the public so that he could help educate non-natives about the culture of Native Americans,” said Tara Damron, assistant curator of American Indian collections at the Oklahoma History Center. “He deliberately priced his work low so that people could afford Native American art.”

Crumbo’s legacy was realized in the continuing artwork of his daughter, Minisa Crumbo Halsey, and son, Woody Max Crumbo. Minisa Crumbo Halsey is a talented artist whose work has been shown throughout Europe and the Russian Federation. This exhibit will feature a retrospective of her work from the 1970s and 1980s. Woody Max Crumbo is a gifted silversmith, and there will be several pieces he created featured in the show, including a concho belt and gorget necklace. The legacy of Woody Crumbo’s art continues to have an impact on current and future generations.

The exhibit is located in the E. K. & Thelma Gaylord Special Exhibits Gallery on the first floor of the Oklahoma History Center. The museum is open Monday-Saturday from 10 a.m. to 5 p.m. and admission is seven dollars for adults.