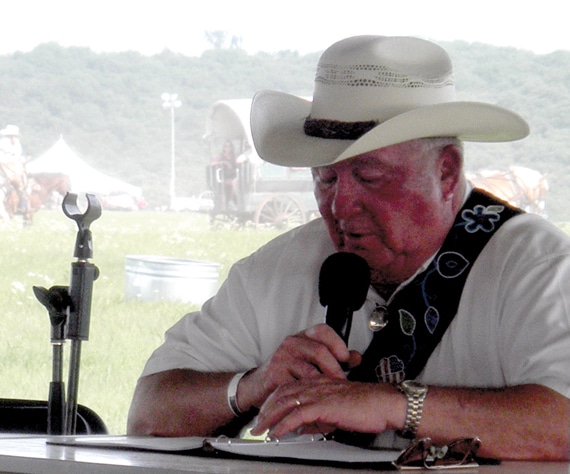 (Above, Jon Boursaw addresses the audience at the recent Symphony of the Flint Hills in Kansas. Below, Kansas Gov. Sam Brownback speaks at the same event.)

Presentations by several Citizen Potawatomi Nation officials and by Kansas Gov. Sam Brownback will highlight a Topeka, Kansas ceremony marking the 150th anniversary of the signing of an important treaty between the Nation and the United States. Jon Boursaw, a Topeka resident and retired director of the CPN Cultural Heritage Center, and Kelli Mosteller, current CHC director, will speak at the event at 10:00 a.m. on November 5, 2011 at the site of the Potawatomi Mission on the grounds of the Kansas Historical Society, 6425 S.W. 6th Avenu 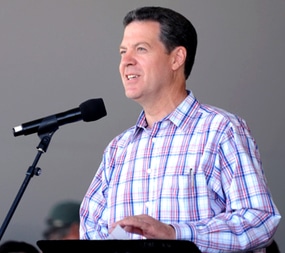 Boursaw will offer a history of the Citizen Potawatomi Nation. Mosteller will offer a discussion of the 1861 treaty and the Potawatomis’ life on the reservation in Kansas.

The 1861 treaty was historic in that it set up one of the earliest efforts in allotting tribal land to individual tribal members in severalty. And, it included a path to U.S. citizenship for Citizen Potawatomis, 63 years before American Indians attained U.S. citizenship generally.

In an academic paper on the treaty, Mosteller wrote, “The treaty marked the official separation of the Potawatomi people into the Citizen Band, who sought to own their land in severalty, and the Prairie Band, who wanted to continue to live on land held by the band in common.”

The treaty was signed on November 15, 1861 at their (the Potawatomis’) agency on the Kansas River, in Shawnee County, Kansas. The treaty stipulated that they (the Potawatomis) “shall cease to be members of said tribe, and shall become citizens of the United States; and thereafter the lands so patented to them shall be subject to levy, taxation, and sale, in the like manner with the property of other citizens.”

Indeed, those Potawatomis who accepted the treaty terms and thus became known as the Citizen Band Potawatomi endured a later decade-long period in which the U.S. government viewed them not as an Indian tribe but as individual citizens with a dual – Indian and United States – nature. Perseverance and Citizen Potawatomi leaders’ ability to interpret and argue the details of their treaty and the Dawes Act of 1887 led to re-recognition of tribal government status and enhancement of tribal members’ allotment sizes and locations once significant numbers of Citizen Potawatomis had moved to Indian Territory.