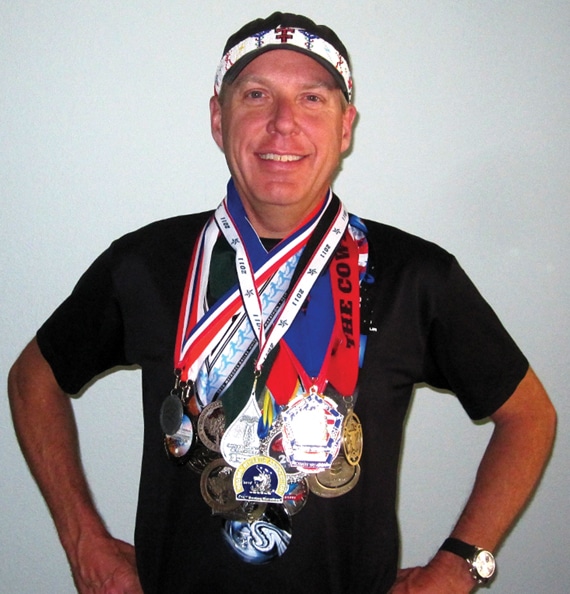 Dr. Jim Higgins displays the medals he has earned as a long-distance runner. In the photo below are Jim’s sister, Kerri Simpson (right), and her daughters Molly Jo (center) and Emily, all of whom have suffered from Lyme disease.

Dr. Jim Higgins, a proud member of the Citizen Potawatomi Nation, is a pediatric gastroenterologist in Lubbock, Texas. As the late Paul Harvey was fond of saying, “Here’s the rest of the story!” 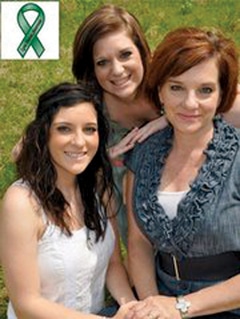 Dr. Higgins is dedicating his participation in the New York City Marathon run in November 2011 to three of the bravest women he knows – his sister Kerri and her two daughters, Emily and Molly Jo. The three CPN members have been battling chronic Lyme disease for the past several years.

Dr. Higgins explained, “That is a battle not only against a microscopic organism, but also against medical, political, and societal ignorance about this disease. Patients and their treating physicians are often ridiculed and even persecuted as they struggle in this battle.”

As with so many chronic illnesses, research is the key to finding treatments and, one day, a cure for this devastating illness. Because this is a disease that does not get much media attention, donations are desperately needed. “By running in my sister’s and nieces’ honor, my prayer is that people will put a face on this disease and understand how it affects the lives of real people, every day” Dr. Higgins said. “I am blessed to be in good health and am honored to be able to run for those that cannot run for themselves.”

Jim’s and Kerri’s parents, E.L. and Carol Higgins, live in McLoud, Oklahoma. E.L., the couple’s three children, and their seven grandchildren are all CPN members. E.L. made a beaded headband for Jim, which he has worn proudly throughout multiple races, including the Oklahoma City and Boston Marathons.

In 2006, at age 46, Jim Higgins began running to lose weight; he quickly realized he actually enjoys it. On April 22, 2006, he ran his first 5K race. It was not long before he was setting goals to run further and faster. By the end of the year, he was training for his first marathon. In January 2007, Jim completed the Houston Marathon in 3 hours 44 minutes and 37 seconds.

As of June 2011, Jim has completed 15 marathons of 26.2 miles, an Ultra Marathon of 30 miles, a Sprint Triathlon, and 61 other races, including 14 Half-Marathons. Recently, he completed his first “double marathon” weekend, running the Timberline Marathon in Mt. Hood, Oregon on a Saturday followed by the Olympic Discovery Marathon in Port Angeles, Washington the very next day. His plan is to run two to four “doubles” each year as he works toward his goal of completing a marathon in each of the 50 states.  Currently, he has completed races in eight states.

Jim and his older daughter, Alison, will be running in the New York City Marathon in November 2011. They will be running to benefit the “Turn the Corner Foundation,” a charity for research of Lyme disease. Dr. Higgins asks anyone who is able to do so to make a donation at http://www.crowdrise.com/thefacesoflyme. Kerri’s, Emily’s, and Molly Jo’s statements about their Lyme disease experiences can be read at that website.

Lyme disease, or Lyme borreliosis, is an emerging infectious disease caused by at least three species of bacteria belonging to the genus Borrelia. The disease is named after the town of Lyme, Connecticut, where a number of cases were identified in 1975. Allen Steere, a professor of rheumatology at Harvard University and previously at Yale University, realized Lyme disease was a tick-borne disease in 1978. However, the cause of the disease remained a mystery until 1981, when B. burgdorferi was identified by Willy Burgdorfer, an American scientist born and educated in Basel, Switzerland, who is an international leader in the field of medical entomology.

Lyme disease is the most common tick-borne disease in the Northern Hemisphere. Borrelia is transmitted to humans by the bite of infected ticks belonging to a few species of the genus Ixodes (“hard ticks”). Early symptoms may include fever, headache, fatigue, depression, and a characteristic circular skin rash called erythema migrans. Left untreated, later symptoms may involve the joints, heart, and central nervous system. In most cases, the infection and its symptoms are eliminated by antibiotics, especially if the illness is treated early. Delayed or inadequate treatment can lead to the more serious symptoms, which can be disabling and difficult to treat.

Lyme disease can affect multiple body systems and produce a range of symptoms. Not all patients with Lyme disease will have all symptoms, and many of the symptoms are not specific to Lyme disease, but can occur with other diseases, as well. The incubation period from infection to the onset of symptoms is usually one to two weeks, but can be much shorter (days) or much longer (months to years).