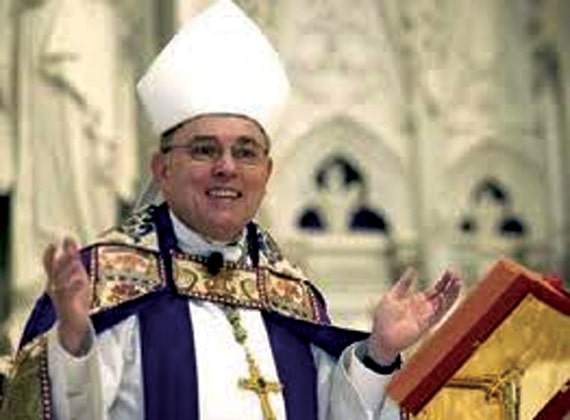 As of 5:00 a.m. on Tuesday, July 19, 2011, in St. Louis, Missouri, former St. Louis archbishop (1994-2003) Cardinal Justin F. Rigali will no longer head the Philadelphia archdiocese. At noon Rome time, Pope Benedict XVI named Denver Archbishop Charles Chaput, a member of the Prairie Band Potawatomi Nation, as the Philadelphia archbishop, effective immediately. Chaput has been in Philadelphia quietly for several days in meetings. Rigali may serve as administrator until Sept. 8 when his replacement is installed with prayers and pomp.

Like Boston Archbishop Sean O’Malley, who was called upon to clean up the tragically flawed Boston administration of Cardinal Bernard Law, Chaput is a Franciscan Capuchin friar. His order of vowed men has as its sacred work, the goal of “rebuilding” the church just as their founder St. Francis did. Chaput, a Concordia, Kansas native, is the first Native American U.S. archbishop. After Rigali turns 80 and loses his right to vote for a pope in a conclave, Chaput is expected to be named a cardinal. While he would become the first North American Native cardinal, several Latin American cardinals have had Native American roots.

Chaput was named Denver’s shepherd in 1997 after having been bishop of Rapid City, South Dakota for nine years. Before that, he headed his Capuchin Province of Mid-America as its CEO and minister. He went to a seminary in Pennsylvania, so, the son of the Great Plains is not unfamiliar with Pennsylvania Catholics. Chaput has a tie with one of St. Louis’ best known historic women, but more of that later.

In July 1988 when Rose Philippine Duchesne was canonized, Chaput led a group of Potawatomis to Rome. In the most colorful minutes of the Canonization Mass, under the great dome of St. Peters, the small group in traditional Potawatomi dress were in the Offertory Procession bearing traditional works of art, including beautiful hand-made moccasins.

Mother Rose Philippine Duchesne, a Religious of the Sacred Heart, left her native France at 49 to live out her girlhood dream of teaching the Indians. In the St. Louis region, she taught several Indian girls, including the daughter of fur trader Manuel Lisa, in schools she founded. But not until she was 71 and had helped open a school in the Potawatomi village of Sugar Creek, Kansas, did she realize her dream of living among the Indians.

Attending Catholic parish schools in Kansas, Chaput grew up hearing about the holy woman whom his Potawatomi ancestors called “The Woman Who Prays Always.” When the canonization was announced, the friar determined to take a group of her beloved Potawatomis to Rome. Before leaving for Rome, he visited the St. Louis region and prayed before the saint’s sarcophagus at her shrine in old town St. Charles. He visited the site of the old City House at Convent and Broadway, near today’s Busch Stadium in St. Louis, and at the Old St. Ferdinand Church in Florissant.

The late Sister Mary O’Callaghan, a historian who led him on the Duchesne tour in 1988, told this reporter how impressed she was with the friar’s devotion to the American pioneer educator. In an interview in Denver last September, Chaput told this reporter that the canonization had been a time of great joy for him and that he regularly prayed to her to intercede with God for him.

He may put her to work now as he takes a broom to the mess in Philadelphia.

Rigali’s retirement had been anticipated since February when a Philadelphia grand jury named him, along with his two predecessors Cardinal Anthony Bevilacqua and Cardinal John Krol, for grievously mishandling the cases of as many as 37 priests who had against them at least one creditable charge of sexual abuse of minors and allowing them to remain in ministry. A few of the priests were no longer in Philadelphia and some were no longer priests when Rigali arrived. At first, Rigali reacted by saying no Philadelphia priests in ministry had “an admitted or established allegation of sexual abuse of a minor against them.” Under the U.S. Conference of Catholic Bishops’ “Dallas” Charter to Protect Children and Youth, approved in June 2002, bishops need not get admissions from the priests but are to turn them over to the civil authorities for investigation.

“It’s been like Good Friday here for four months,” said Rocco Palmo who writes the worldwide Catholic blog “Whispers from the Loggia” from his native Philadelphia. “Ever since the grand jury report we have been waiting for the next shoe to drop, wondering what is next. Now, I think that Chaput will give people a sense of hope. He’s a visionary bishop and is wonderful with people.”

“For first time in 100 years, Philadelphia will have a bishop who has been a parish priest,” Palmo said. “You know where you stand with him. As one of his friends said to me, ‘He’s in your face.’”

If not for the abuse reports, Rigali might have stayed in Philadelphia for three or four more years. Under canon law, all bishops send the pope a letter of resignation when they turn 75. For Rigali, that was in April 2010. But that letter is rarely accepted from cardinals in good health. Cardinals often remain in office until they turn 80 and lose their vote in the conclave.

Rigali, a member of a Vatican commission that has been working on refining the English translations of church rites, including the Mass, is expected to fly to Rome to attend that group’s meeting late this week. After a vacation, he likely will return to Philly for late August farewells.