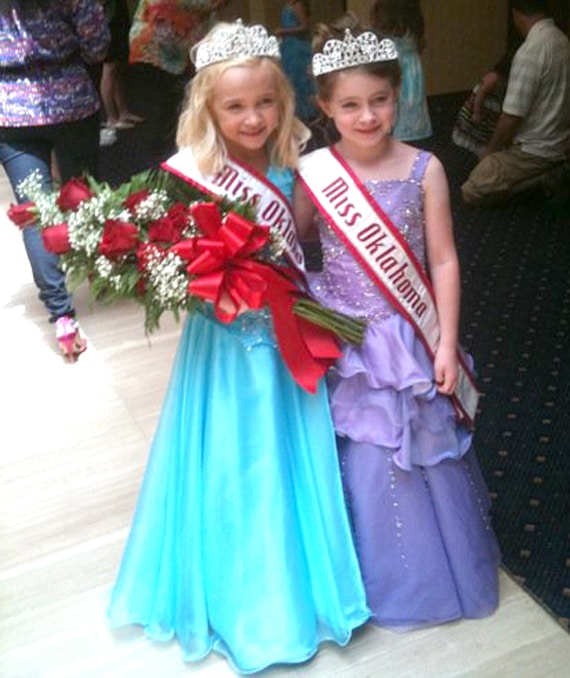 (CPN member Kamryn Vernon, left, poses with the 2009 winner of that title at the June 11-13 pageant in Tulsa.)

Kamryn Vernon, Citizen Potawatomi Nation member and daughter of Tory and Michelle Vernon, has won the title of Miss Oklahoma Princess in the National American Miss Pageant. The pageant was held from June 11 through June 13 in Tulsa, Oklahoma.

A panel of judges scored the contestants in the following categories: Formal Wear, Personal Introduction, Interview, and Community Involvement. Kamryn competed in the Princess division along with 49 other girls who are four to six years old.

Kamryn will be a second-grader at Westfall Elementary in Choctaw, Oklahoma in the 2010-11 academic year. Her other honors include being an eight-time National All-Star Cheerleading Champion, receiving the Presidential Citizenship Award, and being on the Superintendant’s Honor Roll. She will represent the state of Oklahoma at the National American Miss Pageant from November 20 through November 27 in Anaheim, California. The young ladies will compete for the title ‘National American Miss Princess.’

Kamryn Vernon is a member of the CPN’s Anderson family, and a descendant of Hazel I. Campbell, who qualified for the 1937 tribal rolls. Hazel Campbell is Kamryn Vernon’s mother’s paternal grandmother. Michelle Vernon, Kamryn’s mother, says, “(Kamryn) is also a descendant of the Younger Brothers, who were outlaws and rode with Jesse James. This must explain her sassiness!”