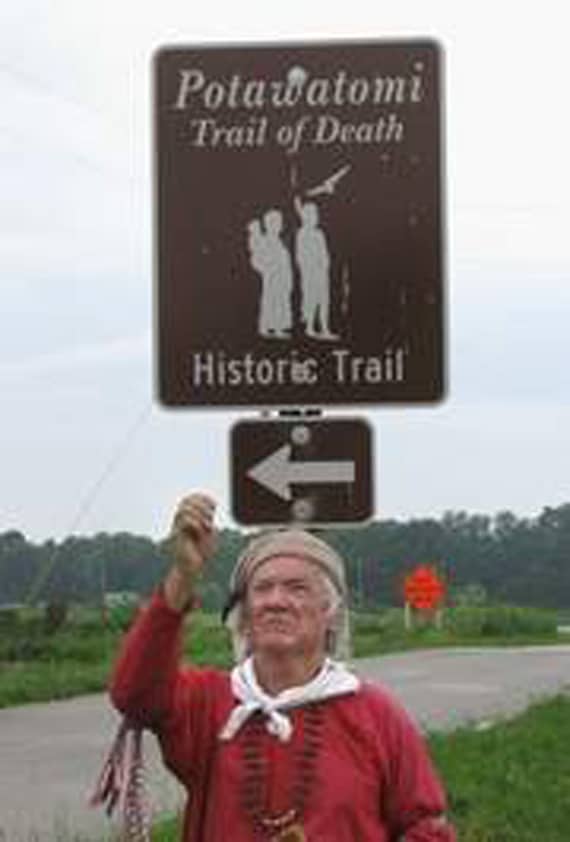 (CPN member George Godfrey offers a tobacco blessing for one of the Trail of Death signs.)

In 1838, more than 850 Potawatomi Indians were forced to march about 660 miles from northern Indiana to Kansas as white settlers began moving into the area. At least 40 died during the journey. On Saturday, June 4, 2010, a group of their descendants, along with historians and Tippecanoe County, Indiana officials, toured Tippecanoe County as they dedicated 16 signs marking what became known as the Trail of Death.

The group stopped at each sign where George Godfrey, member of the Citizen Potawatomi Nation and president of the Potawatomi Trail of Death Association, said a blessing and gave thanks, dropping pieces of tobacco in remembrance. “It’s a type of appreciation which has been growing,” Godfrey said. “People are starting to realize this is a really important part of our history.”

A series of private donations paid for the signs, which highway officials erected over the past year, said Tippecanoe County Highway Director Opal Kuhl. With the dedication of highway signs in Tippecanoe County, Indiana now is the first state to completely mark the trail, according to Shirley Willard, treasurer of the Potawatomi Trail of Death Association and a Fulton County historian.

The forced march started in Marshall County, Indiana, near Plymouth, reaching Fulton County on the second day. Willard, who has been working on the trail project for more than two decades, said recognition of what the Potawatomis endured is long overdue. “In 1988, I made the connection with George Godfrey, and we started working on commemorating the Trail of Death,” she said. “People didn't know about it. They knew about the Trail of Tears.”

The Trail of Tears was the forced removal of more than 45,000 Native Americans from their homes in the southeastern United States a few years earlier. Thousands of men, women, and children died on the march West.

For some Potawatomi descendants, the memories stirred by the trail project remain bitter, Willard said. “But to many of them, it’s a good thing,” she said of the project. “They realize this group of white people do not feel the way the settlers did.”

Kathy Atwell, executive director of the Tippecanoe County Historical Association, accompanied the group during the dedication of signs. “We have to remember because the people who were there are gone,” Atwell said. “If we don’t keep telling their stories, then they will be completely gone.”